India must be wary of Tamil extremism in Sri Lanka 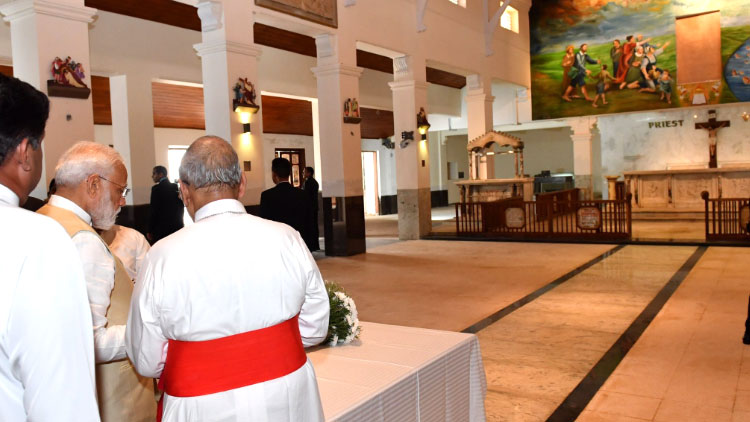 As Prime Minister Narendra Modi begins to build a relationship with Sri Lanka's new leadership, the one thing he needs to be wary of is the extremist Tamil position in the island nation.

Modi made history by becoming the first Indian prime minister to visit Sri Lanka after 1987 when Rajiv Gandhi went to Colombo to sign a pact to end Tamil separatism, which eventually consumed his life in 1991.

Modi won many hearts by becoming the first Indian leader to visit Jaffna, the Tamil heartland which is also the hub for the Northern Provincial Council (NPC) headed by Chief Minister C.V. Wigneswaran.

This is where Modi came across an intransigent Wigneswaran.

This is a critical time for Sri Lanka, which is trying, not successfully though, to overcome decades of ethnic strife that has split the island dominantly between the Sinhalese, the majority community, and the Tamils.

The end of the military conflict in May 2009 led to boisterous Sinhalese frenzy and a defeated Tamil psyche as the Liberation Tigers of Tamil Eelam (LTTE) was crushed.

Further strains were introduced when Mahinda Rajapaksa, after losing the presidential election in January this year, blamed the West and - specifically - India for his defeat at the hands of Maithripala Sirisena.

The presidential election outcome was itself a close affair, showing that Rajapaksa still has wide support in Sinhalese areas. Since then, he has been attracting massive crowds at public meetings.

It was at such a sensitive juncture that the NPC, overseen by Wigneswaran, passed a resolution in February, just before Sirisena landed in India on his first trip abroad, accusing successive Sri Lankan governments of committing "genocide" against the Tamils.

It went on to say that Tamils have no hope for justice in any Sri Lankan mechanism, whether conducted by the Rajapaksa or Sirisena or any regime, and sought international intervention.

Needless to say, the move hugely embarrassed India. It was also just what Rajapaksa needed to show his Sinhalese constituency that Sirisena's election had emboldened extremist Tamils.

If this wan't enough, Wigneswaran, at the Jaffna meeting where he received Modi, called for talks between the Sri Lankan and Indian governments as well as the Northern and Eastern Provincial Councils to resolve Tamil issues "in an innovative and creative manner".

This is akin to the Hurriyat seeking to involve India, Pakistan and itself over Jammu and Kashmir.

Wigneswaran's demand in Modi's presence came shortly after the Indian prime minister had met leaders of the Tamil National Alliance, the party to which the chief minister too belongs, and called for patience.

It is surprising that Wigneswaran sought to bypass his own party by demanding direct talks between his provincial council as well as Colombo and New Delhi.

Indeed, after the NPC resolution on "genocide", friends of India in Sri Lanka suggested that it would be best if Modi avoided a public engagement involving Wigneswaran in Colombo or Jaffna.

The argument was that Wigneswaran seemed to be acting at the behest of the pro-LTTE Tamil Diaspora in the West and his words and actions could only show Tamils as extremists - and fuel appropriate Sinhalese backlash.

This is the last thing that India - and Modi - need now.

As India tries to help join the disjointed Sri Lanka jigsaw, which by itself is no easy task, it has to be borne in mind that Tamil extremism is essentially anti-Indian. It has always been so and will always be so.

India must be wary of being seen to be supportive of extremists - of any kind in Sri Lanka. It is no surprise that Wigneswaran gets the loudest cheers from Tamils in the West opposed to any reconciliation in Sri Lanka.

(M.R. Narayan Swamy is a long-time Sri Lanka watcher. The views expressed are personal. He can be reached on narayan.swamy@ians.in)