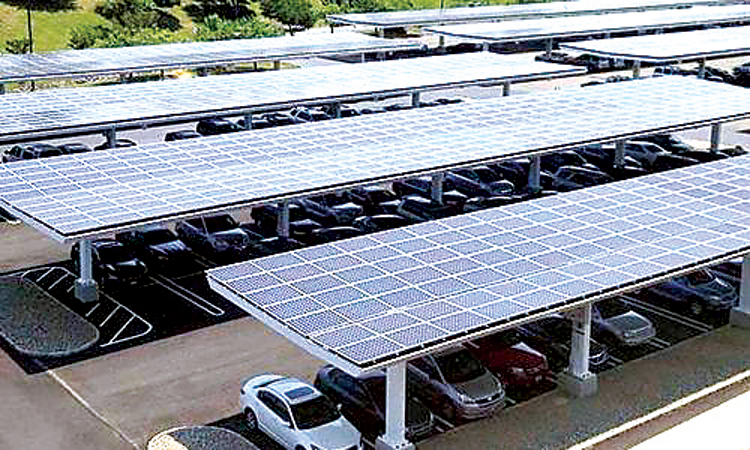 The World Trade Organisation (WTO) recently ruled against India's Domestic Content Requirement (DCR) for setting up solar power plants. Yet, there are ways to meet DCR in a way that it does not violate the multilateral trading norms.

To backtrack a bit, the national solar target was revised to an ambitious 100 GW in 2015, with a focus on indigenous manufacturing of solar cells, modules and other associated components of solar power plants.

Currently, India has 5.62 GW and 1.21 GW of PV (photovoltiacs) module- and cell-manufacturing capacities. However, the industry is operating at only 30 per cent capacity because of lack of demand as imported modules are cheaper.

Although 3.33 GW was installed in India over the past two years, more than 75 per cent of the capacity employs modules imported from China and other competitive countries.

Indian modules and cells become expensive because of complicated mechanisms to avail of subsidies like the MSIPS (Modified Special Incentive Package Scheme) and a lack of vertical integration, economies of scale, low-cost finance and, finally, adequate dedicated infrastructure such as silicon-processing plants and stable power supply.

Without a strong manufacturing base, India will end up spending $30 billion on imported PV modules to reach the ambitious 100 GW target. Energy security, which is another objective in JNNSM (Jawaharlal Nehru National Solar Mission), will not be achieved. There are various policy instruments that the government can engage to boost domestic manufacturing like tax exemptions, soft loans and the DCR.

The DCR clause mandates a part of solar installations to use indigenously sourced or manufactured components. It incentivises nascent domestic manufacturers by providing them a secure market for a stipulated period. In principle, it should be phased out when indigenous manufacture becomes competitive with its international counterparts. The Indian government had stipulated DCR in some projects of JNNSM Phase 1 and Phase 2.

In February 2013, the US filed a dispute against India at the WTO claiming bias against imported cells and modules through this DCR. The US claimed that this clause was inconsistent with the General Agreement on Trade and Treaty (GATT) Article III:4, which demands equal treatment for domestic and foreign products.

The WTO rightly ruled against India on grounds of discrimination against solar panels while procuring electricity. This essentially means that the government was purchasing the electricity that was generated from the panels under the DCR clause.

According to WTO norms, the goods being discriminated against and the goods being procured should be either similar or have a competitive relationship, which was not the case in this dispute. India is now planning to appeal against the decision at WTO's highest court, the Appellate Body.

This decision of the WTO leaves no elbow room for India to implement DCR in its current form. However, DCR can be employed in another way. A majority of the government entities planning to install rooftop photovoltaic (RTPV) systems can use domestically manufactured modules. In this case, India will be able to support the DCR clause for government usage as India is not a signatory to the Government Procurement Agreement (GPA), which enforces otherwise.

The argument because of which India lost the case will not hold good since the government is no longer procuring electricity, but only consuming whatever is generated with no associated monetary value or transaction. The only condition should be that these RTPV systems do not generate more than the consumption in each building.
Indian Railways alone consumes 17.5 billion units of electricity (1.8 per cent of the country's total electricity demand) with an annual expenditure of over Rs 11,000 crore ($1.6 billion). If 10 per cent of this demand is met by DCR, this would add 1 GW capacity. Similarly, there are a large number of government entities such as hospitals, schools and institutions that consume a large amount of electricity. These buildings typically have large rooftop areas suitable for RTPV installations.

Further research using tools such as Geographical Information System (GIS) can be used to estimate the suitable rooftop area available to such government entities.

Once the potential assessment exercise is completed, India can decide the magnitude of DCR it wants to implement within the WTO norms. This will allow domestic manufacturers to operate within a niche space till they achieve cost competitiveness and strengthen the indigenous manufacturing base.

(Manmeet Singh is an intern and Saptak Ghosh a research scientist with Bengaluru-based think-tank CSTEP. They can be contacted at manmeets@cstep.in and saptakg@cstep.in. The views expressed are those of CSTEP)