Sonia-Rahul grab eyeballs in UP, but will votes follow? 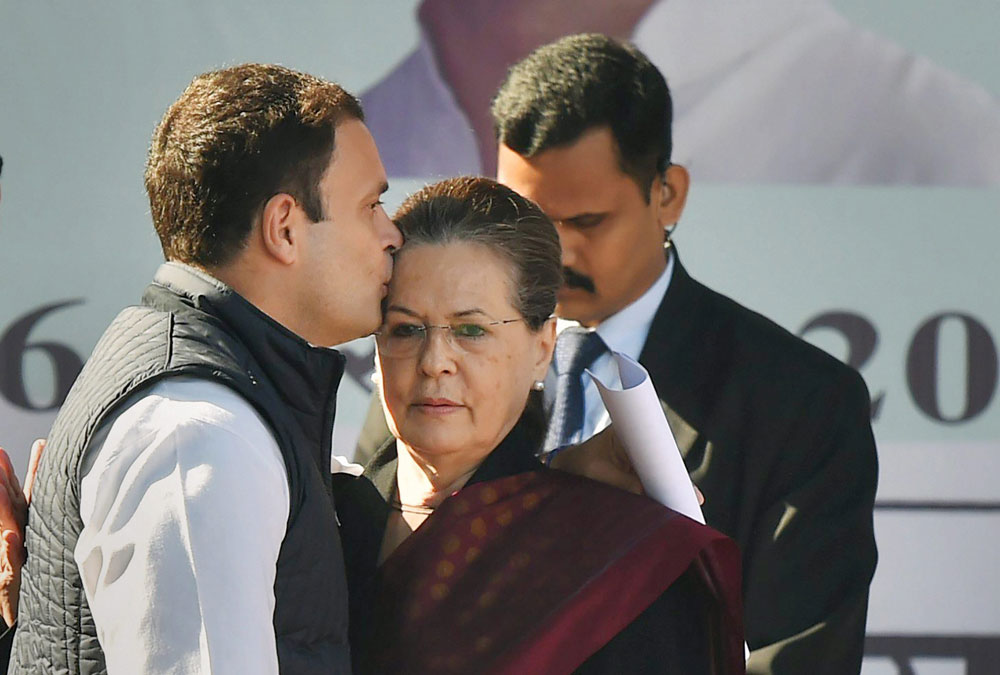 Lucknow: Congress President Sonia Gandhi succeeded in grabbing eyeballs at her aborted road show in Varanasi on Tuesday. She briefly interacted with party workers and supporters who thronged both sides of the roads for a glimpse of her, but her planned obeisance at the Kashi Vishwanath temple and meeting with local experts on the Ganga river fell through as she took ill and was rushed back to Delhi.

Now, the question: is the turnout she attracted in Prime Minister Narendra Modi's parliamentary constituency any indication of a revival in the Congress' fortunes in Uttar Pradesh, where it has been on the sidelines for the last three decades?

The question evokes mixed feelings as the people by and large think that other than "creating a flutter", the party will not benefit much from the road show. Political observers here say that the crucial vote bank of the Congress, which it lost to others in the 1990s, is still guarded about the desperate overtures of the party leadership.

The Brahmins are more or less wary of the pro-Muslim tilt of the Congress and the Muslims, who were once at the vanguard of the party's successive electoral successes in the Hindi heartland, are still "far from once again relying on the party, specially after the demolition of the Babri mosque (in 1992)", a senior Congress leader averred.

Not wishing to be named for fear of being singled out as a "stumbling block in the party's efforts to climb back to relevance", the leader told IANS that the Congress strategy to project high-profile leaders -- Sheila Dixit and Raj Babbar -- has, however, succeeded in energising its moribund cadres.

The newly-appointed state Congress chief Raj Babbar, prior to the road show, was candid enough to admit that the party needs a miracle to make an impressive comeback.

An earlier show -- Udghosh -- late last month presided over by Congress Vice President Rahul Gandhi was a runaway success where more than 40,000 party workers braved monsoon showers to interact with the Gandhi scion. These two shows, along with the bus ride its chief ministerial candidate Sheila Dixit took from New Delhi to Kanpur, have so far succeeded in creating some ripples in the state.

The fact that #SoniainKashi hashtag was trending on Twitter on Tuesday indicated that the party has climbed some notches in the public mind.

The Bharatiya Janata Party (BJP), the Bahujan Samaj Party (BSP) and the ruling Samajwadi Party (SP) are making light of the Congress efforts and say that however desperately it may try to create a political space for itself in the state, it would ultimately be rejected.

"There is no dum (power) in Congress, it's a dead party," said a senior minister in the Akhilesh Yadav cabinet who maintained that the SP will romp back to power in the 2017 assembly elections.

BSP leaders, now a little chastised about what they speak publicly, term the talk of the Congress reviving as "Mungeri Lal ke haseen sapne" (day dreaming) and point out that the party's efforts to woo Dalits and Muslims will fall flat.

"People of both these sections know that the Congress has done nothing for them in the last 60 years and have only used them as vote banks," a senior BSP leader said.

The BJP's state leaders are also dismissive of the prospects of a Congress resurgence and joke that it was only going to cut votes at best. "Congress is the B-team of the SP and BSP and it will only slip further this time as we go to the people against this unholy nexus of these three parties," state BJP general secretary Vijay Bahadur Pathak told IANS.

With the success of the road shows, strategist Prashant Kishore seems to have done well, giving the Grand Old Party some hope to cling on to.