Will protect women, girls as a father and not just CM: Stalin

Sponsored, synchronised attacks on judges increasing in the country:...

'Hitler' may not return: An ode to a stray dog 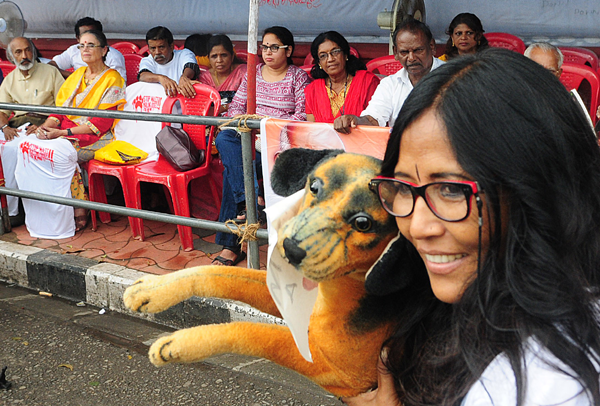 Thiruvananthapuram: Over the years, I have always been fascinated by dogs but never the stray dogs in our neighbourhood.

On many occasions, after seeing well-trained dogs in homes, the thought has taken shape in my mind as well, why not one in my home too. But, this has never become a reality for manifold reasons, including the fear factor and not to mention the question if my interest in dogs can be sustained.

Of late in Kerala, stray dogs have become a menace as every other day, reports of canine attacks have been hogging the headlines, especially on the nearly dozen TV channels, where visuals of affected persons are shown again and again.

According to the latest official figures, in the past 10 months, 10 persons have died on account of dog bites in the state and over a lakh been bitten, including infants.

But things took a unexpected turn for me when, in the middle of the night in early June, I heard the feeble cries of a dog. Ignoring them, I again went to sleep.

But next morning, the first thing I did was to check out in the vacant compound next to my home and I saw a very small black puppy unable to even stand up. Under normal circumstances and given my antipathy towards stray dogs, this puppy also should have been driven away, but somehow I did - and could - not do it.

Instead, the puppy was soon given milk, which he gulped down in a flash.

Then after a while, he was given food, which too disappeared in no time, and from then on, the puppy slowly became an extended member of our family.

Day by day, the intimacy developed and all of us took time off to spend time with the puppy, who was christened "Hitler" - I don't why!

Soon he started to get a feeling that he was cared and each time the gate was opened in my house, he used to make sure that he popped his head across the compound wall to look who it was. If he found the visitor shabbily dressed, he would express his dissent by barking and maybe to alert us this is an unwarranted visitor.

Then came the question if the dog was a male or a female and here we got it all wrong as we were misled by an Assamese youth who said the puppy was a male.

It was later pointed out by our neighbour, an avid canine lover, that it was female.

But male or female, it never made any difference for us and our friendship grew with "she" given an anti-rabies shot.

Soon her food habits changed, thanks to the local fisherwomen who used to keep aside fish waste for Hitler.

After that every day around 7.45 a.m. she used to wait for my arrival, as she knew she would get a sumptuous breakfast.

While our association was getting strong, a few cats, our old acquaintances realised that they were left to fend, while Hitler was treated with more care and comfort.

But unlike us, Hitler appeared to show concern for the cats and everyday ensured that each cat was allowed a bite from her share of breakfast.

Hitler soon became sought after by even our friends, as she used to be readily available at her favourite place with her head put between the iron grill.

And for our neighbour's kids Pappy and Penina, the only thing that they requested was that they are unable to pronounce the name and asked if it can be changed, but their request was not accepted.

But things appear to have taken a turn for the worse as when I went with her dinner on Tuesday, despite several calls, there was no response and it was for the first time, that she was not at his regular place for having food.

On Wednesday, my wife Nirmala twice called up from office to find out if Hitler has returned (not once has she called to find out if I have returned).

On Thursday morning, I made a visit to the nearby compound where Hitler's kin and friends reside, but could not locate her.

Five days has passed since she went missing and all of us every day several times look out of the window, to see if she has come back.

But now, all of us have started losing hope if Hitler will return, as following the death of a 90-year-old man at Varkala on Wednesday, after he was mauled by a few stray dogs, the public ire has increased and we shudder to think that Hitler might not return.

It certainly was a new experience for all of us and by now, every bark that we hear and every passing black dog that is seen on the road, will not miss our eyes, hoping against hope that this might be our Hitler.

P.S: Our son appeared to be more optimistic and hoped that maybe the authorities would have taken Hitler for their ongoing animal birth control programme and could likely return her or perhaps a dog lover would have taken her as part of the ongoing 'adopt a stray dog' programme.