A CM who cannot raise a voice 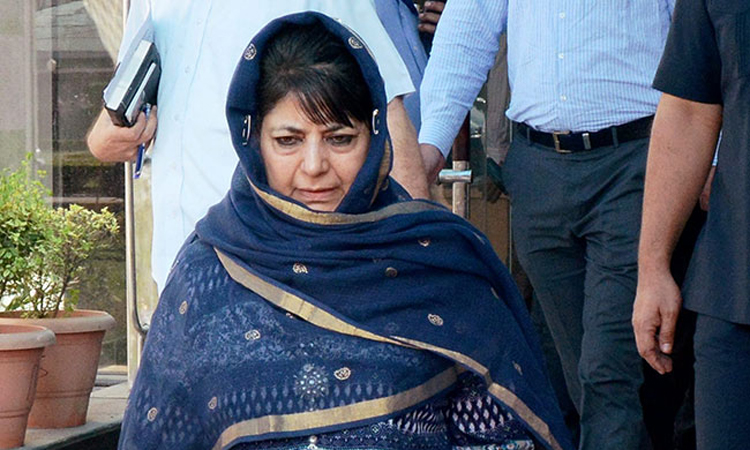 On March 1, the coalition between Peoples Democratic Party (PDP) and Bhartiya Janata Party (BJP) completed three years, half term of an elected government in Jammu and Kashmir. On this day in 2015, Mufti Muhammad Sayeed was administered oath of office and secrecy in Jammu . A few hours after the swearing-in ceremony, a document christened as Agenda of Alliance was made public. It was purported to be the roadmap for the coalition to meet political and developmental objectives.

In the age of show-off and propaganda, the political parties hunt for and invest in occasions and events to highlight their achievements but the PDP that leads the coalition tends to feign ignorance on arrival of such occasions. It is like estranged couples compelled by circumstances to avoid a divorce, not having any eagerness to celebrate marriage anniversaries.

From the first day of the coalition to this week when four civilians were killed allegedly in cold blood in south Kashmir’s Shopian, the PDP leadership has been compelled to comply with the BJP’s agenda.

The PDP did not embrace BJP after sufficient thought process. The verdict thrown by the 2014 elections had left little room to weigh other options for a coalition. With 25 seats in BJP’s kitty and a strong Narendra Modi ruling New Delhi, Mufti’s two months of ‘introspection’ encouraged him to take a plunge as a ‘historic opportunity’ of joining north pole and south pole.

Mufti had envisaged continuation of his three year rule between Novembers of 2002 and 2005 when Kashmir witnessed a relative calm and developmental pursuits a visible flip. He could not place the difference between the transitory Center of his time when AB Vajpayee was replaced by Manmohan Singh to the highly consolidated and dominant Modi-led government of 2014. He had judged Modi by his gesture of inviting SAARC heads of state including the then Pakistan Prime Minister Nawaz Sharief on his oath ceremony. It was Mufti’s ill-luck that Modi proved to be diametrically opposite to the perceptions he had developed about him. A month before his demise, Mufti was unequivocally snubbed by Modi at a public rally in Srinagar in December 2015 with the declaration that he did not require advice on Kashmir from anybody. Before Modi’s speech, one (Mufti) had sought to counsel him on engagement with all stakeholders in Jammu and Kashmir and significance of pursuing dialogue process with Pakistan as was done during the Vajpayee-led NDA regime.

The recent killing of nine civilians in two villages of restive Shopian by the troopers of a Rashtriya Rifles battalion is reminiscent of early 1990s when hundreds of people in Kashmir were killed by the soldiers with impunity. The first set of people was declared fit to be killed because it sought to hamper an anti-insurgency operation or hurled stones on the patrolling army. The broad daylight murders were justified as an act of self-defence before a lynching mob. The sanction had already been issued by the Army chief Gen Bipin Rawat to snuff out anyone who comes in the way of army’s operations.

The second set of killing of four civilians was conducted when darkness had enveloped the area. No one except the army knows what exactly happened on March 4 evening. A brief shootout and bodies of six persons—two militants and four civilians—were found at different locations, one of them 5 kilometers away from the shootout site.

These killings found Chief Minister Mehbooba Mufti completely disarmed and helpless. She ordered a magisterial probe into Ganowpora killings to be completed within 20 days and directed filing a case with a promise to take it to its logical end. An officer, Major Deepak came under scanner for his involvement.

Deepak’s father, a serving lieutenant colonel, approached the Supreme Court, which directed the state government to restrain investigation against the army officer. The compliant state government told the apex court later that Deepak was not named in the FIR. The routine FIR over the shooting was declared as ‘coercive action’ and stayed till April 24. The BJP leadership showed no qualms in justifying the civilian killings.

Interestingly, on a day when impunity to the army was more loudly pronounced by the apex court on March 5, the Shopian belt was mourning the death of a new crop of youngsters. The army dubbed them as Over Ground Workers accompanying the slain militants. Mehbooba Mufti, however, showed exemplary courage by referring to them as civilians caught in cross firing. She did not announce the customary probe though. Two days later, in a high-level meeting with top security and intelligence officers in Srinagar, she ritualistically asked them to adhere to Standard Operating Procedures during counterinsurgency operations and to ensure there was no collateral damage. Little did she know that these words have lost the meaning, both for the commoners in Kashmir and the government forces handling them.

Ironically, PDP’s choice is limited to clinging to power. The party’s think tank awaits miracles for a prolonged spell of peace when they would come up with sops and measures on economic development. However, the coalition partner is disallowing the party to gain this luxury. The turn of events in the follow up of savage rape and murder of 8-year Ashifa in Rajouri demonstrates the BJP’s design. From the attempts to hush up the case before it catches the limelight to brazenly endorsing the rapists, the BJP leadership in Jammu pronounced their agenda explicitly. The circumstantial evidence indicates that the girl was abducted, drugged in confinement, raped and killed with a clear design to communalize the situation. It was not the handiwork of Special Police Officer Deepak Khajuria alone to commit the heinous crime but a formal structure created ground for it. The chief minister expressed resentment when the supporters of rapist misused the tricolour but she did not utter a word when two of her cabinet colleagues took part in a rally organized by Hindu Ekta Manch.

It is ironical that the PDP is not able to take initiatives that impact the public perception in Kashmir. Mehbooba’s admission that she would be dubbed as anti-national for urging dialogue with Pakistan and her intellectual minister Naeem Akhtar’s insistence on engagement with Pakistan in the context of China’s growing influence in the region, may be a desperate attempt to cater to the public sentiment in Kashmir. However, the BJP leadership is least impressed. They do what they do.