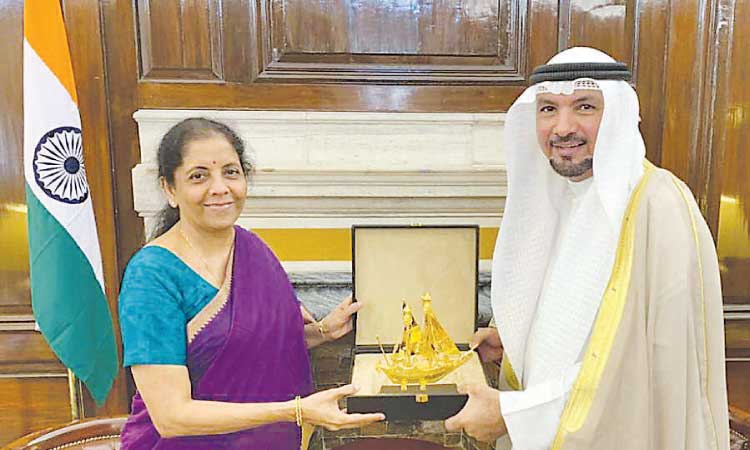 Pune: Rebutting the allegations of "stealing" money from the central bank, finance minister Nirmala Sitharaman Tuesday said the Congress leader should have had consulted his own past finance ministers before levelling such charges.

She also said it is "outlandish" to question the credibility of the Reserve Bank which had formed the Bimal Jalan panel with eminent experts, and also "worrying" if questions are raised against the panel.

Without explicitly mentioning the Rafale controversy, Sitharaman said the Congress is used to making allegations of stealing or calling someone a thief, and wondered why it persists with it despite the electoral drubbing.

"The Congress should have consulted its own finance ministers and senior leaders before making these allegations regarding the RBI. They have become an expert in making such allegations of stealing and I do not want to pay much heed to this," she told reporters here.

Earlier in the day, Congress leader Rahul Gandhi hit out at the government over the record cash transfer from the RBI, saying the prime minister and the finance minister are "clueless" about solving the "self-created economic disaster" and accused them of "stealing money" from the central bank.

The Opposition party's charges had come a day after the RBI board decided to transfer a record Rs 1.76 trillion to the government, which included Rs 52,000 crore of excess capital identified by the Jalan panel.

On the former RBI governor Raghuram Rajan's comments in  December 2018 on the likelihood of the RBI's rating getting downgraded if its excess capital is carved out, Sitharaman said the Jalan panel was appointed by the RBI itself, with eminent experts and met several times before arriving at its conclusion.

"Any suggestions about the credibility of the Reserve Bank, therefore, seems a bit outlandish to me," she said.

The panel went into the issue of excess RBI capital like the earlier two panels on the subject and considered all important aspects, including financial stability and contingency requirements, before coming at its formula, based on which the capital is being transferred, she said.

It can be noted the RBI's excess reserves had become a thorny issue between the RBI and the government last year.

Former governor Urjit Patel and his deputy Viral Acharya, who quit separately before their terms ended, were opposed to part with the reserves and had also found support from Rajan.

Within weeks of taking over, present governor Shaktikanta Das, who had retired as the finance secretary, appointed the Jalan panel in consultation with the government in December 2018.

According to experts, the windfall from RBI--the budget had pegged only Rs 90,000 crore as dividend-- can be used to prop up the sagging economic growth.

Former chief economic advisory Arvind Subramanian, who had first pointed to the excess reserve and had also called for paring it down, had opined that the money should be used only for specific purposes like bank recapitalisation.

Sitharaman Tuesday said the government is yet to decide on what to do with the money.

As per the FY18 annual report of the RBI, it had excess capital of over Rs 9 trillion, or over 27 percent of its core capital, which is almost double the global average.

She also said the idea of overseas borrowing by the sovereign does not hinge on this more than budgeted money from the central bank and the government will separately take a call on the same.

About the sops for the auto sector, Sitharaman said she has announced a set of measures last Friday and is awaiting to hear from the industry on the same before taking any further moves.