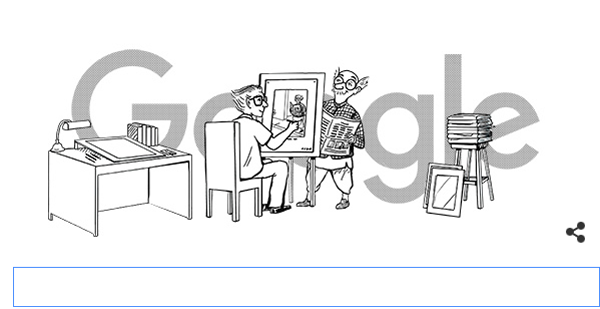 Designed by guest artist Reshidev RK, the doodle shows the sprawling Rashtrapati Bhawan in the backdrop of what appears to be a tableaux from various parts of the country. There is the Qutab Minar, a peacock, the national bird, plentiful fields, farms and crop motifs depicting the nation's overall agricultural base.

An elephant-like structure rides the peacock tableaux. The doodle aptly depicts the famous parade floats that decorate the cities on the day throughout the nation -- each representing a different component of India's history: environment, architecture, textiles, wildlife, monuments, and farming.

January 26 marks the Purna Swaraj Day when the Constitution of India came into force in 1950, though it was adopted in 1949, the Google blog accompanying the doodle said.

On January 26, 1930, the Indian National Congress issued a bold resolution declaring complete freedom from the British Raj. From that point, it was only a matter of time before Independence Day, followed by full sovereignty.

Celebrations take place all across the nation, with the epicenter in the capital city of Delhi, where a parade runs along Rajpath near the President's residence.

The tradition dates back to the morning of January 26, 1950, when thousands gathered to watch a simple yet grand ceremony at the Durbar Hall where the first President Dr Rajendra Prasad was sworn in.

Observances last for four days, coming to a conclusion on January 29 with the Beating Retreat ceremony, featuring the bands of the Indian Army, Navy and Air Force.