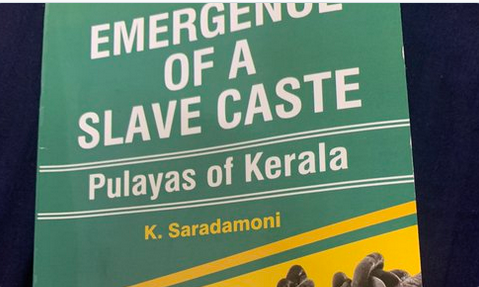 New Delhi: The landmark study on caste slavery in Kerala by K Saradamoni, "Emergence of a slave caste: Pulayas of Kerala", is getting a new edition after four decades by People's Publishing House, Delhi.

Saradamoni traces the evolution and abolition of slavery in Kerala through administrative reports, writings of British officers, travellers, and church mission records from the 1800s and 1900s. Even Though her book became an important reference material, it was not re-issued for a second edition until now.

K. Saradamoni is one of the pioneers in Dalit and gender studies in Kerala. She started working on the paper in the 1970s when she came across a file titled 'Abolition of slavery in Kerala' in the archives of the India Office Library, London. She published the landmark study in 1980, reported The Hindu.

Pulayas constituted the largest enslaved community in Kerala, and the system in the early 1800s, they were the absolute property of the masters. Pulaya existed to ensure that their masters had a continuous supply of workers, They did not own land or even their children.

They could be made to do any kind of work and sold to anyone. Saradamoni found that the price of an enslaved person was from Rs 6-18 in those days. The enslaved were given just enough to sustain themselves. And the masters were not accountable to anyone. He could also punish the enslaved for any offence, even by death.

The British government legally abolished slavery in 1843 in India. The first anti-slavery proclamation was issued in Travancore in 1853. The Cochin royals issued the proclamation in 1854. However, both proclamations had a clause that ensured that a slave and freeman will be treated the same according to the caste hierarchy. But, a free man will have equality before the law in case of committing a crime.

The clause was removed in 1855 in a new declaration in Travancore. The state had around 10,000 enslaved at the time.

Even after slavery was abolished in 1862 by the Indian Penal Code, people belonging to lower castes were denied access to public courts and education. This made it hard for them to improve their social status even after 50 years. Saradamoni noted how people of lower castes had to wait nearly a century to attain the rights to own the land where their huts existed.

Meanwhile, welcoming republishing of the book after decades, noted writer and novelist NS Madhavan shared the cover of the book in Twitter and said "Essential reading for understanding Kerala. It took more than 4 decades for a reprint, which came out just months before the passing away of the author, Pro. S Saradamoni. Thanks, PPH and a big thanks to @charmyh for the alert."

Essential reading for understanding Kerala. It took more 4 decades for a reprint, which came out just months before passing away of the author, Pro. S Saradamoni. Thanks PPH and a big thanks to @charmyh for the alert. pic.twitter.com/MrLF42mEIb