Yet another show to be slammed 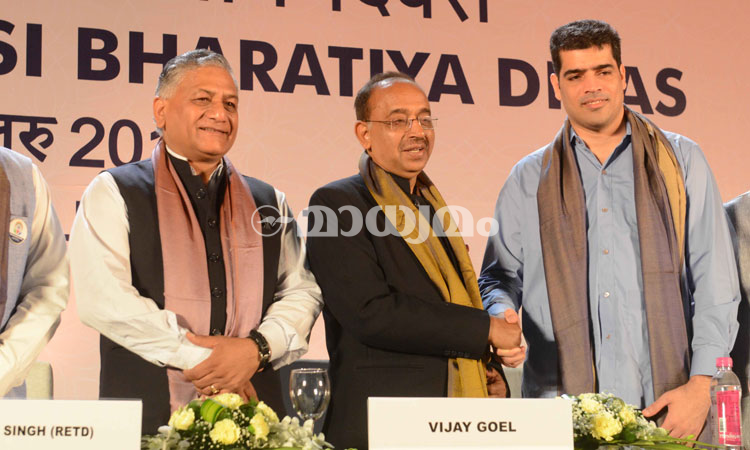 The day is celebrated to commemorate the 100 years of Mahatma Gandhi’s return to India from South Africa on January 9. It was established in 2003 and a forum for issues concerning the Indian diasporas is organized and the Pravasi Bharatiya Samman awards are given. At the 13th PBD, the vice President Mohammad Hamid Ansari, gave away the 'Pravasi Bharatiya Samman' awards to 15 NRIs for their ‘exemplary’ work. But only one could be considered as truly exceptional- awarding Ashraf Thamarassery, a UAE Malayali who helps families of Indian expatriates who die there send their bodies to India. The Prime Minister said he had fulfilled the promises made to the NRIs such as lifelong visa, OCI schemes, the PIO card for people who didn’t have their Indian citizenship, and visa on arrival for 43 countries including electronic travel authorization. Modi had also suggested an online quiz competition ‘Bharat ko Jano’ for the young people to know more about India. He called for the support of the NRIs for the Ganga cleaning scheme to clean the River Ganga and make it a source for economic empowerment for 40 percent of the population.

According to the reports from the Centre, the total number of delegates who attended the meet is the highest ever since the PBD initiative was launched in 2003 by Vajpai’s NDA government. An estimated 25 million people of Indian origin and NRIs live and work outside India. The event fulfilled the expat’s nostalgia for their motherland and their urge to connect with old roots. But the event has lost all its excitement in the years. Nothing remarkable has been achieved in the past one decade other than awarding the Pravasi Bharatiya Samman honors. The Vajpai government under the leader ship of L M Singhvi, in 2000 formed a committee to study state of the NRIs and to submit a report based on which the then NDA government formulated the Pravasi Bharatiya Divas and Samman. The terms of reference given to the Singhvi committee and the report submitted to the government after the studying the interactions with the NRIs generated hopes. But petty politics interfered with many leaders using it up for their personal motives. Vajpai’s “shining India” hype was eventually doomed.

The meet in years have turned into show of manufactured patriotism. It is visibly clear that the Modi government is using up the opportunity to attain his ‘agendas’. All sorts of Indians living abroad were supposed to be welcomed equally. But expensive hotels of Gandhinagar were booked for the delegates and the whole event seemed to be organized for rich American and European NRIs. The NRIs have toiled hard and helped flourished the economy. But the voices of the poor NRIs haven’t seem to be reached the ears of the government who have been calling on the Indian Diaspora endlessly for bolstering the country’s economy.