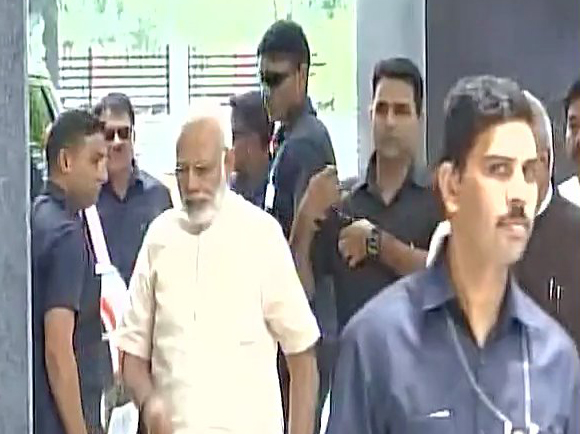 The Narendra Modi government has passed the controversial Land Acquisition Bill in the Lok Sabha , where it has a big majority and is waiting for the approval from the Rajya Sabha as severe criticisms from the Congress-led Opposition term it as “anti-farmer”.

The Prime Minister on Sunday, appealed to the farmer community on his monthly “Mann Ki Baat” program on All India Radio not to be “misled” by the “rumours and lies” spread by the Opposition for the purpose of creating confusion for “political reasons”. He stressed that the proposed law was in the interest of the farmers and would improve infrastructure, employment, output and incomes in rural areas. An executive order was passed by the government in last December to make it easier to buy land. But an approval by the Rajya Sabha, where the NDA government lacks majority, is needed, to ratify the Bill before the end of this parliamentary session in May as the order lapses on April 5. Modi who took several digs at the Congress during the program, would be trying to get the Bill passed somehow. The Bill would not be passed into law if the Opposition unanimously opposes it. The new Bill, which seeks to amend the land acquisition Act of 2013, has faced severe criticism from opposition parties and activists saying that it would hurt farmer’s interests. The government on the other hand kept stressing that the interests of the farmers have been taken care of.

Modi said that the Land Act of 2013 was “enacted in a hurry” and strongly rejected the accusations that the Bill was in favour of the corporate and that it was anti-democratic. Even as the Prime Minister assures that his government was open to new suggestions related to the Bill that would be beneficial for the farmers, he said that all aspects of the new Bill would remain intact and that the states could still consider and follow the previous law. The PM asserted that the amendment to the Bill was brought to guarantee fair compensation rights and transparency in the land acquisition dealings. The government should consider the interests as well as the apprehensions of the people while taking crucial decisions on matters related to them. But the new Bill doesn’t reflect that.

The previous law has provisions for considering the interests of the individual who are the land owners and the developmental schemes and activities need consent of 80 percent people in the area. This is not the case with the proposed Bill. The new Bill insists on carrying out a social impact assessment (SIA) to determine the impact on the livelihood of those losing their land. According to the new Bill, the land owners could get back their land if the projects don’t get completed within the stipulated time frame as opposed to the earlier law which guarantees the land back to the people if it is not used up within five years of acquisition. The officials if found violating the law would be punished as per the old rule. According to the new law, permission from the government is needed to question the officials.

Modi assured that the farmers would get four times more compensations saying that any “lacunae” in the law must be addressed. But no money could replace the warmth of home and shelter for the poor farmers. Rural Development Minister Chaudhary Birender Singh said that he spent sleepless nights thinking about the plight of farmers as well as the responsibility of the government before he introduced the land bill in Lok Sabha. The statements of the Prime Minister clearly indicate an evasive stance of the NDA government who panders to the interests of the corporate bigwigs rather than giving priority to the welfare of the people. The move is akin to monocracy of the BJP government in the land acquisition dealings with the poor landowners left to bear the brunt of the government actions.