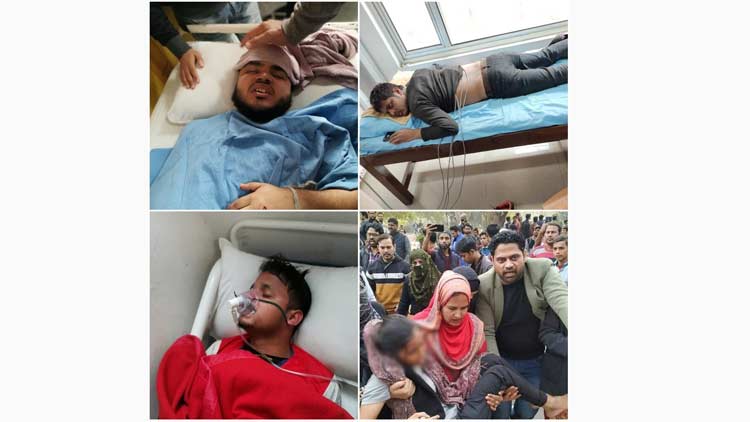 Jamia Millia Islamia central University has been a pride of India for long representing a tradition of the country’s freedom struggle.

The BJP government is all set to move ahead with the decision of opposing the minority character of the University. The Human Resources Development Ministry has decided to renew an affidavit filed in the Delhi High Court earlier withdrawing its support to Jamia Millia’s minority status. Jamia Millia Islamia was established in 1920 as a minority educational institution. The national leaders involved in the freedom struggle established the prestigious institution for minority communities heeding Gandhiji’s call for a national protest to boycott British control of educational institutions. Maulana Mehmud Hasan, Maulana Mohammad Ali, Hakim Ajmal Khan and Dr Mukhtar Ahmad Ansari were the prominent personalities who founded Jamia Millia University. Rabindranath Tagore had called Jamia Millia ‘one of the most progressive educational institutions of India’. The University was showered with praise by Sarojini Naidu, the nightingale of India as well who said that the institution was built up ‘stone by stone and sacrifice by sacrifice’.

With special rights to the minorities incorporated once the Indian Constitution was adopted, legal battles for the University’s minority status has been in progress. The National Commission for Minority Educational Institutions recognized it as a minority institution in 2011. Its benefit is that fifty per cent of the seats in the University could be reserved for minority communities. However, the BJP has never hidden the fact that they have never been able to swallow the Muslim minority, which forms the country’s prominent minority community, getting this benefit. The Ministry has said that Jamia Millia was set up by an Act of Parliament and was funded by the Central government. Therefore the University is not eligible for a minority status. They also claim that these considerations bestowed on Aligarh University and Jamia Millia University as a proof of Muslim appeasement.

It’s not mandatory for the BJP to withdraw the minority status of the institution only because it’s funded by the Centre. In India, isn’t about 50 per cent of the seats reserved for the Scheduled Castes /Tribes and other backward classes in institutions funded by the government itself? In Babasahib Bhimrao Ambedkar University based in Lucknow, fifty per cent of the seats are reserved for Dalits. Article 30 (1) of the Constitution states that all minorities whether based on religion or language, shall have the right to establish and administer educational institutions of their choice. Jains, Christians, Sikhs and other communities have been running their own minority institutions. They receive financial assistance including grants from different government departments. Given that the Centre doesn’t seem to be bothered to create a fuss over all these aspects, the devilish intentions behind the move of going only against the institutions run by a community branded as backward class that lagged much behind than other communities in the Sachar Committee, Kundu Committee and Ranganath Mishra Commission reports, is crystal clear.

The Jamia Millia management had tried to run things as per the likes of the BJP government ever since the saffron party came to power in the Centre. Smriti Irani, the then HRD Minister was invited for the convocation program in 2014. A skill development Centre was opened under the name of Deendayal Upadhyaya, the founding leader of Jana Sangh. A new department of Sanskrit was started this year. Yoga Day celebrations weren’t skipped even during Ramadan. MiG 16 war plane has been on display in the campus where there is a national flag already flying in one of its block. Despite all its efforts to be in the good books of the saffron brigade, the BJP isn’t ready to safeguard the identity of Jamia. An eleven-member panel appointed by Maulana Azad Education Foundation (MAEF) in December had found that Muslims were the ‘educationally most disadvantaged community’ among the minorities in India. As a solution, the committee proposed a three-tier model for education that includes establishing 211 central schools based on the Kendriya Vidyalaya models, in the minority concentrated districts as well as setting up community colleges and higher education institutions through an Act of Parliament. Minority Affairs Minister Mukhtar Abbas Naqvi announced that the report was currently being studied and that the government would be figuring out the components that could be implemented as soon as possible. He also said that the system would be implemented from the next academic year. It’s amidst these developments, that Modi government attempts to ‘nationalise’ Jamia Millia.

Minority character is a broad concept, constitutionally. Nobody has the right to violate minority rights that forms the fundamental part of the Constitution. Utilizing this right, even the Hindus run Sindhi, Tamil, Telugu and Gujarati institutions as they fall under the category of linguistic minorities. There are similar institutions in Jammu Kashmir and Punjab where Hindus form the minority community. The feverishness displayed by the BJP that raises the slogans of ‘Sab Ka Saath, Sabka Vikas’, to snatch the Constitutional rights of only the Muslims, matches that of a communal Fascist party. But it doesn’t suit a party that governs the ‘land of diversity’ called India.