Devilish motives behind the hue and cry for Presidential rule 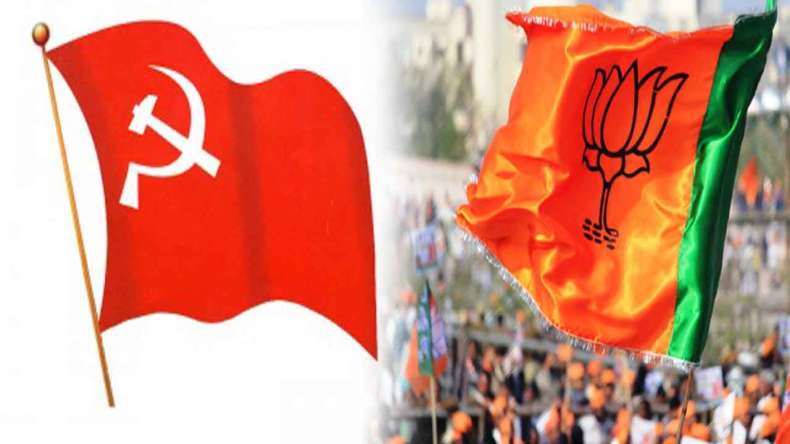 RSS Joint General Secretary Dattatreya Hosabale during a press conference in Delhi revealed that Presidential rule was inevitable in Kerala considering the present circumstances existing in the state and that the party had already forwarded the demand to the Prime Minister as well as the Home Minister.

One of the main reasons cited for the need to impose Presidential rule was that the violence in Kerala was ‘state-sponsored’. The fact that majority of those recruited as Islamic State terrorists were from Kannur district and are closely related to the party pockets, also call for the imposition of Presidential rule in the state it seems. Such an incorrect statement can be made publicly only if there is a staggering ignorance about Kerala. To believe that the national leadership of the RSS could display such an immense lack of knowledge regarding Kerala which remains one of the states with the maximum number of party shakhas in India, is impossible. In reality, the justifications for accomplishing the clandestine agenda of the Sangh Parivar in Kerala is what’s behind such a statement.

The BJP is preparing for a nationwide campaign to be attended by the national leaders and BJP Chief Ministers led by national president Amit Shah owing to the RSS-CPM politics of violence. RSS Chief Mohan Bhagwat will also arrive in Kerala this month itself aiming to cleanse the Sangh Parivar and to carry out an assessment of the conflicts. The BJP is presently making attempts to launch a direct attack at the LDF government itself rather than targeting the CPI (M), to foster an anti-state government mentality and to sabotage the elected government with the help of the national media. The frantic visit of Union Minister of Finance and Defence Arun Jaitley to Kerala and the condolence speech at the house of the slain RSS worker also reinforces the fact. He asks whether it was right for the state government to physically eliminate those who followed a different political ideology. It’s also in the same backdrop that apprehensions are triggered regarding the Governor’s unusual moves which undermined the federal system during the political violence and murder in Thiruvananthapuram; whether they are part of the conspiracy to sabotage the elected government using the power at the Centre. Chief Minister Pinarayi Vijayan’s statement during the state conference of the Kerala Police Association that the communal forces were trying to threaten the present government arises surely out of the fears of destabilizing the state government.

The CPM has a crucial role in perpetuating political violence in Kerala.The RSS also has an equal role. They nurture and maintain the parties by slaughtering each other. The political killings in Kerala could be ended if the party leaders take a firm decision to maintain a stringent law and order system and to curb the party workers. The peace talks in Thiruvananthapuram called on by the Chief Minister and the bilateral talks attended by the CPM and BJP leaders in Kannur are certainly great steps towards peace if initiated sincerely. However, the peace discussions and bilateral moves shouldn’t be arising out of the fear of losing power. If the government succumbs to the pressures from the Centre and bows down before its misuse of power to remain in power that will only benefit the BJP in the long run. Therefore the Left Front should sincerely adopt the clear cut decision to put an end to the politics of violence within and outside the party and to come out of the body language of an ‘approver’. This is necessary for beating the Sangh Parivar agenda of using the clashes as a political catalyst and make use of it as a shortcut path to power, at least in Kerala. The state government can at present, prevent the vested interests from imposing Presidential rule in Kerala. Sincere efforts for peace and the determination to boldly face the threats and intimidations are what is expected from the state government in order to foil the goals of Kerala visit by those ranging from Mohan Bhagwat to Amit Shah as well as their campaigns.