Hate campaigns of a Union Minister 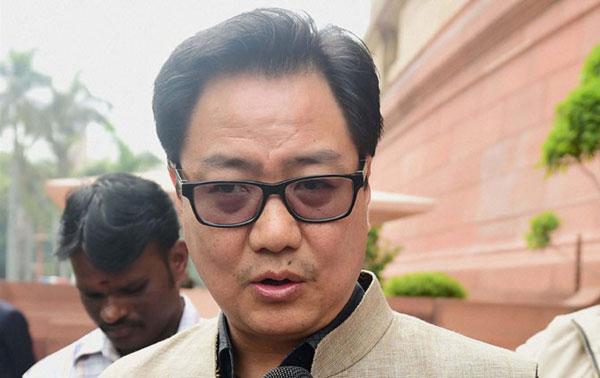 Union Minister of State for Home AffairsKiren Rijiju’s remarks on Hindu population have stoked up a new controversy.

The Minister said that the ‘Hindu population was reducing in India as they never convert people’, while minorities were ‘flourishing unlike some other countries around’. The Sangh Parivar frequently bringing up the population comments is plainly to fan communal hatred by triggering fear and anxiety among the minorities.

It needn’t necessarily be related to reality. The state Congress committee had come out against the Sangh Parivar for making use of the tradition and cultural practices of the indigenous tribes of the north eastern state of Arunachal Pradesh for political gains and pushing them to adopt Hindutwa ideologies. Rijuji in a series of tweets was responding to statements of Congress. The saffronisation wave in north India haven’t so far had the required impact in the north eastern states. The Sangh Parivar has been for yearsmaking attempts to consolidate the Hindu vote bank by conspiringand campaigning against the Christian missionaries who growing influence in the region have been upsetting the party. Rijuji who is a practicing Buddhist has now come forward advocating it. The Minister could as well save his face from the corruption allegations related to a Rs 450 crore scam in a hydropower project in the state.

Even though, being the Union Minister for Home Affairs, he makes efforts to make his revelations seem authentic, his remarks downgrade him to a mere Sangh Parivar promoter. The above tweet that emits communal hatred is not his first shot. Rijiju had earlier backed the remarks of the Assam Governor P B Acharya that ‘Hindustan is for Hindus’ and ‘Muslims in India are free to go anywhere’, including Pakistan.

Next was his revelation that quoted a controversy. He had said that the South Indian Muslims were more attracted to the ISIS ideology than their north Indian counterparts. He had earlier attacked the country’s first Prime Minister Jawaharlal Nehru saying that Nehru surrendered the country and let the people of Northeast down in the 1962 war against China. The lack of historic backing or evidences needed to reinforce his claims didn’t seem to bother the Minister. He only wants to be in the good books of the Sangh Parivar. Rijiju had also rushed to ‘handle’ the situation when prominent film maker Anurag Kashyap criticised the saffron troupe for targeting the Pak artists in Bollywood and when the student agitations in the Jawaharlal Nehru University in New Delhi gained momentum. He apparently never seem to lose any opportunity to incite the sentiments of aggressive nationalism and communal hatred.

The Sangh Parivar has been raising the population issue since the 70s. The false campaign that the Muslims were exceeding the Hindus in population was the best weapon they found for executing communal polarisation. The 2011 population census report contained certain facts contrary to the usual ones that benefitted the nationalists. While there was a growth of 24.6 per cent in the rate of Muslim population during the last decade, it was 16.8 per cent in the case of Hindus. However, of the total population of 121.09 crores, Hindus constitute96.63 crores that is 79. 8 per cent of the population while Muslims come up to 17.22 crores which is 14.23 per cent. Christians constituted a mere 2.78 crore that is 2.3 per cent.

The growth of Hindu population in the last decade amounts to the total number of Indian Muslims in 2001- 13.8 crores. It was in the Muslim community then that a reduction in the population growth and rate of reproduction was registered. By concealing such facts and bringing up only those aspects that would aid them in scoring political gains, the Sangh Parivar has been employing the divisive ploys of inciting hatred among the different communities and splitting them. Rijiju’s statements prove that even those in senior posts eventually succumb to these communal strategies advocating them.

Rijiju and the Sangh Parivar who advocate hatred, target the Hindu-Christian polarisation in the north east. Party chief Amit Shah has even formed a north east surveillance program for the purpose. The Christian missionaries have a huge influence among the different sections ranging from aborigines to terrorist groups. Even while strengthening the campaign against the Muslims in north India, the RSS is making attempts to consolidate the Hindu integration against Christians in the north east, Chhattisgarh, Jharkhand and in some regions of Madhya Pradesh.

The Sangh Parivar had softened their anti-Christian movements after the brutal murder of a Christian missionary Graham Staines and his family by burning them alive in their jeep in 1999 and also the Kandhamal communal violence of 2008, both in Odisha. They are once again conspiring to saffronise the region with the backing of the Central government and Rijiju’s remarks could indicate just that.