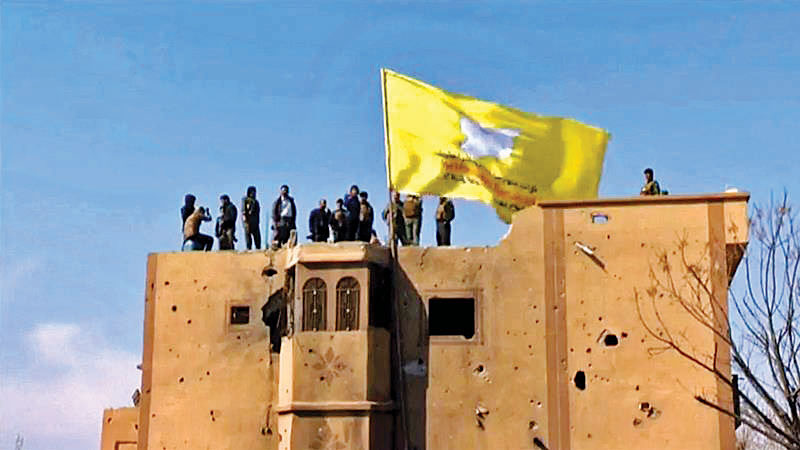 The developments that have been surfacing of late, indicate that Islamic State terrorism that has been spreading fear at the global level for the last five years, is nearing its end.

The world keenly paid attention to the official announcement made by Iraq Prime Minister Haider al-Abadi that Mosul, the country’s Sunni-majority city and once a power hub of the IS, has been liberated. Although the government forces are in the firm control of the city, isolated encounters seem to be taking place. Abadi had expressed happiness saying that with the destruction of the historically significant masjid of al-Nuri in Mosul in the last week of June, Islamic State has admitted defeat. It was in this masjid where Abu Bakr al-Baghdadi declared a caliphate and proclaimed himself the Caliph or world leader of Muslims in June 2014. Hence its destruction is seen as the end of the Caliph’s influence. It was after recapturing the cities such as Ramadi and Fallujah that the power centre of the ‘Caliph’ was seized with the support of the militia trained by Iran as well as the US warplanes. However, the claims of Russian authorities that Baghdadi might have been killed were repeated by the Syrian Observatory for Human Rights based in London. Meanwhile, there were also reports that the IS-backed Arabic news agency Al Amak saying that Baghdadi has been killed in a US bomb blast near Al Raqqah in north Syria during Ramadan this year. According to the latest reports, IS militants have moved towards the city of Hawija along the shores of Tigris and they are being led by Abu Haitham al-Obeidi. Besides Hawija, Tal Afar, Anbar and Salahuddin provinces and Diyala are reportedly under the control of Islamic State.

The question whether the destruction of Mosul and the death of Baghdadi would free the world from the challenges posed by Islamic State terrorism cannot be answered suitably. It’s because the information that is being made available even from ‘authorised’ sources are contradictory even to the politics behind the phenomenon called the IS. According to Edward Snowden whose revelations sent shock waves across the world, Baghdadi was a spy trained by Mossad, the Israeli intelligence agency. The goal of the strategy that was accomplished so far using the Islamic State was to bring all the extremists and terrorist outfits to one place. The current predicament of West Asia reveal that this man named Baghdadi drew his last breath bringing complete havoc to a community under the guise of which he emerged before the world. The city of Mosul that once flourished as a hub of culture and trade since 10th century is a ghost town today. The reality is that both the parties who engaged in fierce battle didn’t spare even a building fit enough for living by humans. The UN human rights agencies describe that the sight of ten lakh people stranded in the desert as refugees as heart-wrenching. Even after the liberation of Mosul from the grips of IS, there is no guarantee that peace would be restored in Iraq. It’s also likely that the IS militants who withdrew into the desert would retaliate with awful vengeance whenever opportunity strikes. Al Qaeda organization led by Abu Musab al-Zarqawi resurfacing during the period of 2006-10 and forming the Islamic State under Abu Bakr al-Baghdadi lie before us as warnings.

Although the nature of fight may be different, many believe that the victory secured by the anti-Islamic State forces in Iraq is likely to be repeated in Syria. Tough battles are being continued for reclaiming Raqqah that has been turned into IS headquarters since 2013. And also for Deir ez-Zor, the largest city in East Syria. The Syrian Democratic forces led by the Kurds with the backing of the US are reportedly making rapid progress. However, the battle in Syria is made complicated because of different vested interests locking horns with each other. Amidst the conflicts between the army of Bashar Al Assad that’s backed by Russia and Iran and the Syrian Democratic Force that has the support of the US and Arab nations, Turkey with its anti-Kurd approach weaving tactics make things more complicated. The over expectation that the risks posed by terrorism would see an end after the liberation of Mosul or the death of Baghdadi, might be untimely. As long as the circumstances that retain such forces and the hands that operate behind them doesn’t change, a peaceful West Asia will remain a distant dream.