Army tank on the campus and military training in schools 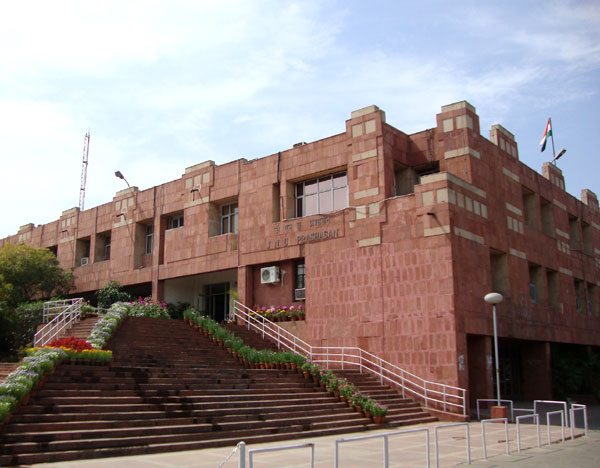 Jawaharlal Nehru Vice Chancellor M Jagadesh Kumar has asked the Centre to procure and put on display an army tank at a ‘prominent place’ on the campus of the University.

The VC put forward his request to the Union Ministers Dharmendra Pradhan and V K Singh during an event ‘Kargil Vijay Diwas’ organized by the JNU. It would supposedly time and again remind the students about the ‘great sacrifices and valour’ of the soldiers. Jagadesh Kumar had in last February itself raised the demand for showcasing an army tank in the campus to infuse nationalism when the varsity premises erupted with student protest.

The Vice Chancellor grabbed the attention right from the start for being an RSS worker trying to steer the campus along the lines of Sangh Parivar ideology and not due to any academic excellence or governing expertise that match a prestigious institution. He has taken over the responsibility of transforming the JNU campus that has been an open space of democracy into a military regime rooted in Fascism. His fervent devotion towards the Sangh Parivar is evident behind all the developments in the campus since he assumed his post. The opportunistic approaches adopted in the student issues including the attempt to hunt down students in the name of sedition to the missing case of Najeeb are evidences. Jagadesh Kumar focused on his strategies to restraint the campus in the grip of Sangh Parivar even in matters regarding the academic council and course revamping without considering the democratic rights of the students and faculties. The actual face of Sangh Parivar that targeted the JNU was revealed during the event on Sunday. Hindutwa writer Rajiv Malhotra openly expressed his happiness in ‘capturing JNU’. He remarked that it was not only ‘a victory of taking over Kargil in the external war but also the victory of taking over JNU in the internal war’ that should be celebrated. Malhotra’s comments are the answers to why the student agitations last year was tackled using the power of the Centre.

The VC’s demand couldn’t be seen merely as a feverishness to prove his loyalty towards the Sangh Parivar. It’s only a sample of transformation attempted by the Sangh Parivar in the field of education after the Modi government came to power at the Centre. The picture would be clearer when the steps of the Central government to initiate an elaborate project to instill ultra-nationalistic sentiments in the curriculum as well as in the campus, are considered. The Prime Minister’s office has directed the Union Ministry of Human Resource Department to incorporate elements of military schools (Sainik Schools) in all the regular schools for promoting discipline, rigorous physical training and a patriotic sentiments. The PMO had called a special meeting of Ministry of Human Resources Development (MHRD) officials last week to discuss the matter. The Centre had put forth this idea in the meeting of Central Advisory Board of Education in October last year. The Modi government has advised to implement the Sainik School training programs, likely to be realized in Kendriya Vidyalayas and Jawahar Navodaya Vidyalayas soon, in the CBSE schools in the country including the 20, 000 schools in the private sector. Union Minister Mahendra Nath Pandey said that it was an attempt to instill patriotism and nationalism in the minds of students.

Defence Minister V K Krishna Menon conceived the idea of Sainik Schools in the 1960s to eliminate the regional and communal differences among the army personnel. It was a planned project to increase human resources for defence services. However, the attempts of the Centre to impart military discipline to school students and instill patriotism in them is akin to the Fascist practice of ‘catching them young’. The saffron group has been targeting the militarization of young generation as part of a national revamp starting from the student days since the time of Hindu Maha Sabha. B S Moonje, the RSS leader visited the military schools run by Italian dictator Mussolini. Moonje demanded the establishment of a similar system in India to infuse ultra-nationalism in students and carried on with his attempts at the organizational level. The move of the Sangh Parivar with the arrogance of power at the Centre, to put on display an army tank in the campus and include rigorous training in curriculums is part of militarization of coming generations along Fascist lines at the expense of the government.