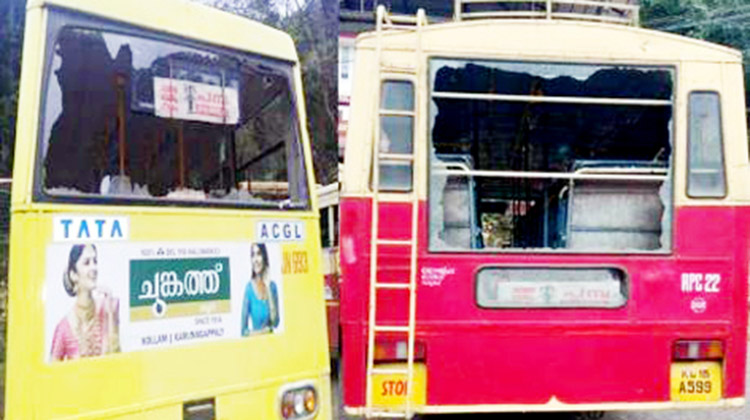 An incident, quite intriguing, occurred in the KSRTC depot in Punalur, Kollam district on Wednesday.

It was the unit meeting of the Kerala State Road Transport Corporation Employees Association (KSRTCEA) affiliated to CITU, the pro-CPM trade union wing, yesterday. The employees went on a mass leave in order to make the meet a celebration. As a result, over twenty services were cancelled in the Punalur depot alone. And the consequence was the passengers, in areas that solely depended on KSRTC buses, stranded midway. The Finance Department had announced a relief package of Rs 130 crore to save the state-run transport company from financial crunch. It was the very next day that the employee union under the control of the ruling party took a step capable of ruining the company and landing people in trouble.

In Punalur depot again, last March, trade union leaders took a leave to attend the CITU Union meet and also marked their attendance the next day quoting a controversy. On April 30, 26 services were cancelled due to the general body meeting of the CITU in Punalur depot. In yet another episode, 45 bus services were called off due to the mass leave of the employees in Chathannoor depot in Kollam district itself, as part of CITU meet last year. The employee union expressed their ‘love’ towards the public sector by attacking a TV journalist who reported this story. Such incidents don’t happen in Kollam district or led by the CITU. Almost all unions move ahead with their ‘employee- welfare activities’ in this way. It’s the personal liberty of the employees to take leave. But when the employees working in a particular depot go on a mass leave one particular day, the senior officials have the responsibility to take measures to ensure smooth functioning every day since it will impact the functioning of the company. However, the dominance of the union in the public sector institutions is so frightening that doesn’t allow the senior officers to perform their duties with a sense of responsibility or refuse a leave. The plain truth is that when the Left front is in power, no officer will have the nerve to take a decision that would annoy the CITU. Amidst that, people facing difficulty or the company incurring huge losses aren’t even considered a subject of discussion.

It’s the policy of the LDF government to rejuvenate KSRTC. Finance Minister Thomas Isaac had said that revamping plans have been devised to make the company profitable in three years. Professor Sushil Khanna of the Indian Institute of Management, Kolkata has been entrusted to study and submit a detailed report. Although the report was expected to be submitted by the end of December 2016, it has not been submitted yet. One will have to wait and see the kind of magic spells Khanna is expected to put forth as well as the steps taken by the government in this regard.

Whatever the case, KSRTC today isn’t a popular company among the public. Like the changing governments, the trade unions also have a significant role in driving the company into its present state. KSRTC has the highest national average if the staff-bus ratio are taken into consideration. Taking into account the number of temporary staff, each bus has nine employees. Still, they are unable to provide even half the quality of service given by the private buses that run with only two employees. The employee associations therefore have a huge responsibility in this regard. The trade union backed by the CPM is the most prominent association in the organisation. With the CPM leadership in power at present, they should have displayed a tad more responsibility to save a public sector organisation dominated by their trade union from crisis. It seems that they are more interested in ruining the public transport company and making the lives of people more miserable.