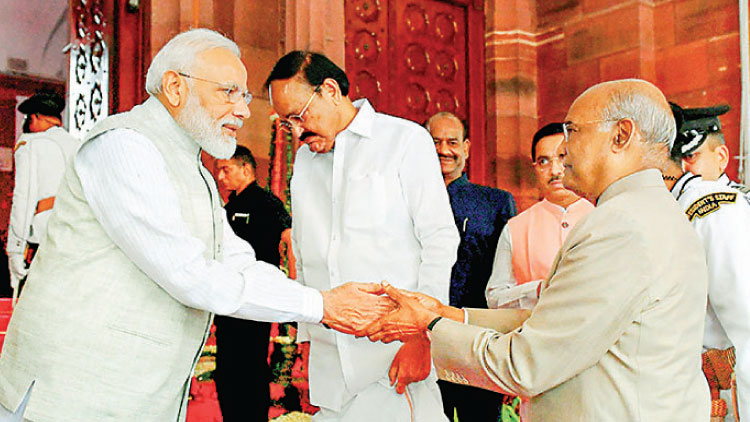 It’s because of comprehending in depth the limitations of the political system. Prime Minister Narendra Modi and BJP president Amit Shah who kept the details of their presidential candidate under wraps so far, shocked everyone including the Opposition leaders by revealing the name of Bihar Governor Ram Nath Kovind as their pick for president on Monday. The choice was absolutely unanticipated. Although the discussions regarding the next president of the country have been alive for almost six months, the name of Ram Nath Kovind wasn’t heard raised from any quarters. Senior leaders like L K Advani and Murli Manohar Joshi getting entwined in the Babri Masjid demolition case, actually made the job easier for those who wished to alienate them. Even though the names of External Affairs Minister Sushma Swaraj, Lok Sabha Speaker Sumitra Mahajan and Jharkhand Governor Draupadi Murmu were some of probables heard many a times for Presidential election, the fact is that nobody got a whiff of what was reeling in the minds of Narendra Modi-Amit Shah duo. The decision proves right the conclusion that they would find a ‘rubber stamp’ president who would be willing to obey their orders of any kind and is least likely to politically pose a threat for them. It will be correct to conclude that the party has succeeded in deciding upon a leader who will feverishly make efforts to create fissures in the opposition by playing the Dalit card and at the same time, blindly recognize the Hindutwa agenda in future. Ram Nath Kovind, who since his student days has been extensively engaged with the RSS and accomplished the tasks entrusted by the BJP in his political and personal life, is actually only one of the many patrons of Hindutwa. His political outlook is crystal clear. Despite a law degree and a successful practice in Supreme Court for years, kovind serving only as the General Secretary of the All India Koli Samaj and BJP Scheduled Caste Morcha chief, might be certainly because of his birth in a backward class. He was elected to the Rajya Sabha twice, to ensure the Dalit representation.

Although the Constitution clearly states about the procedure to select the nation’s first citizen, many political ideologues believe that picking personalities beyond politics through consensus, is the best way. But the reality is that ruling and the opposition parties could never think beyond the web of narrow-minded politics. Since the NDA led by the BJP that rules the country, wasn’t confident of a majority to select a president with ease, they had sought the assistance and cooperation of the opposition. Anybody could easily understand that it wasn’t because of believing in any healthy democratic precedence. Instead of seeking support for an individual, the demand that was raised was to help the person they field, win. The NDA Parliamentary Board on Monday decided about Kovind after which other leaders including Congress president Sonia Gandhi was informed about it. Therefore, the Opposition doesn’t have any responsibility to back the NDA candidate.

Even as adopting maneuvers of creating a confusion in the Opposition by fielding a Dalit leader, a few showing changing sides shows the extent of their commitment towards secularism. Instead of seriously contemplating on ways to stop an advocate of Hindutwa from making his way to the Rashtrapati Bhavan, overlooking the agenda of Sangh Parivar deeming that the presidential candidate fielded is a Dalit, would only land the nation into more darkness. In Andra Pradesh, both the ruling and the opposition parties back the NDA candidate. It might be fearing the political impact by opposing the Dalit leader from Uttar Pradesh, that BSP leader Mayawati said that the party would back Kovind if the opposition doesn’t choose a Dalit candidate. The change of mind is visible in Nitish Kumar as well. When the Opposition parties meet on June 22 to weave tactics, a decision foreseeing a democratic and secular future of the country is absolutely expected. The opposition should now strive to uphold the nation’s democratic tradition by choosing a candidate, whether a Dalit or not, an individual with esteemed personality, who is totally eligible to become the president, someone who doesn’t pander to the political pressures. Time has come for the Opposition to prove that they too, are proficient in deploying political tactics.