Passengers could be fined for not wearing masks: Railways

A tragedy triggered by inefficiency 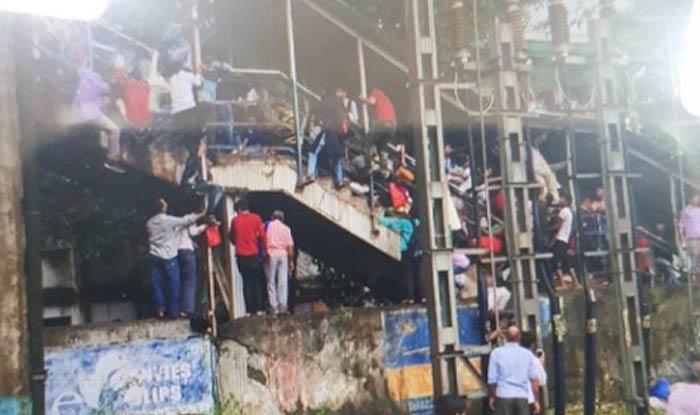 The stampede that took place recently at the Elphinstone Road railway station that led to the tragic death of 23 people is a perfect example of ineptitude shown by the central and state governments in the field of basic development and severe negligence displayed in handling transportation in big cities.

On Friday morning, during the rush hour, four trains arrived simultaneously at the Elphinstone Road station and the adjacent Parel station in central Mumbai. This coupled with a sudden downpour made people run for shelter onto the overbridge connecting both the stations. It led to a stampede at the narrow staircase leading to the overbridge thereby causing the death of many. The Railway Minister as usual, visited the site of the accident and those including the Prime Minister condoled the deaths thereby ‘fulfilling’ their duties. Those concerned aren’t so far known to have come forward to diligently analyse the totally unexpected human tragedy that occurred at the heart of the big city which has a population of two crore, or to carry out consultations at the expert level about the methods to prevent the frequent accidents in other parts of the country. Raj Thackeray, leader of BJP ally Shiv Sena, recently remarked at a press conference that the country’s Railways kill more people than ‘terrorists and enemies like Pakistan’. It might be because of comprehending the reality that our Railways claim the lives of about 3, 500 people on an average every year. When the cabinet reshuffle took place last month, replacing Suresh Prabhu who had been handling the portfolio till then with Piyush Goyal was seen due to the failure in preventing the increasing number of Railway mishaps. However, every tragedy reminds us that it’s not who heads the Railway department that matters, but that the security measures and the excellence in service depends on how efficiently and scientifically a public sector undertaking, one of the world’s biggest institutions, is run.

It’s now rampantly being admitted that the absolute negligence as well as the irresponsible management of matter related to the development of basic facilities of a megapolis, the commercial capital of the country like Mumbai by the Railway is the basic reason for all the accidents. The Members of the Lok Sabha representing the region had submitted a petition several times to former Minister Suresh Prabhu, who is also a Mumbai resident, demanding to construct a wider bridge linking the two stations in place of the old one which is used by over one lakh pedestrians every day. But it wasn’t taken seriously. The fact that the negligence and sluggishness displayed by those concerned in improving and revamping the basic facilities of the 300 km suburban railway, that ferries 80 lakh passengers in Mumbai every day to their destinations, never became a subject of discussion, is pathetic. The political leadership and the ruling machinery, whenever comes an opportunity, brag about Mumbai being a ‘global city’ that controls the nation’s economy. The old railway stations and related amenities built by the British have become ineffective in the 70 years of independence but no efforts have been taken to revamp them. What is more astonishing is that the need for renovation has not occurred to the government so far. It’s not the problem of Mumbai alone. Indian Railway is lagging behind in the development of basic facilities plunging into decline. Although there might have been a ten to twenty times increase in the number of passengers after independence, we are much behind in comparison with the global standards in basic facilities. The tragedy that took place in Mumbai could strike any Indian city. It’s because one could easily comprehend from the daily struggles that the narrow staircases, overbridges and constricted routes make travel by train in Kerala extremely difficult.

Indian Railway is an extensive network that functions as the backbone and nervous system of the country. It cannot move forward with the outdated management borrowed from the British and old fashioned outlooks. It’s been decades since renovation and reconstruction has become essential. The issue of priority is also equally important. The attention and enthusiasm of Prime Minister Modi and the Railway Minister shouldn’t be in implementing the bullet train, a project that benefits only the rich. The government must be willing to seek the advice of the experts in the field at the international level to study about the required measures to be taken immediately in developing the basic amenities that affect the lives of crores of citizens. It’s better for those concerned to remember that the people might not abstain from taking to the streets one day if attempts are continued to curb the public ire by expressing the usual ‘ceremonial’ condolences after every mishap.