The dilemma within the CPI (M) 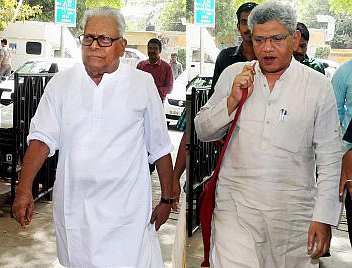 Ever since the Hindutwa forces stormed to power in India, it is pointless to not admit or conceal the reality that the secular parties of the Opposition have landed themselves in severe dilemma.

One side of the confusion is whether the present dispensation is a Fascist government in true sense or if it is a far right government that displays signs of Fascism while the other side is as to whom to ally with in order to confront and oust the government. It’s naturally the Communist parties, that adopt stances after ideologically analyzing the incidents and the changes, which have been deeply affected.

It has been years since discourses related to the matter began within the Left Front’s comparatively powerful CPI (M). Given that the 22nd party congress is scheduled to be held soon, heated discussions led by the CPI (M) have been going on in order to achieve clarity in their approach. Reports indicate that the discussions with Party General Secretary Sitaram Yechury on one side and former General Secretary Prakash Karat on the other, have reached a crucial stage with the latest Polit bureau meeting. Karat faction, who is reluctant to admit that Narendra Modi government is a true Fascist regime, have reached a decision that it’s difficult to fight against the NDA government by joining with the dethroned Congress. Given that it’s clear that the support of the majority in PB is for this opinion, a confirmed decision could be expected only after the central committee meeting entrusted to finalise the political resolution that is set to be presented in the party Congress. Therefore the opinion of the majority of the Polit Bureau members in the states including Kerala where the party is in power, is that, since the NDA government follows the same neo-liberal policies of the Congress, there is no question of joining hands with one party in order to oppose the other.

Since the main opponent in Kerala is still the Congress-led UDF, they point out that forming an alliance with the Congress against the BJP would be suicidal. However, Yechury and the Bengal faction that oppose this argument, draw attention to the practical reality that it is impossible to fight BJP at the national level without allying with the Congress. They argue that the outcome would be damaging if the party does not join hands with the secular parties including the Congress to tackle the common threat of Fascism by neglecting the truth that neither the CPI (M) nor the Left Front is a powerful force in India.

It’s certain that the hubbub could not be neglected or brushed aside as the internal issue of the CPI (M) alone. All those who believe in secular democracy and the country’s diversity realize that India should be freed from the clutches of the Sangh Parivar that finds pleasure in saffronising the nation and making the lives of the people miserable ever since the party assumed power at the Centre, as quickly as possible. No party including the Congress can accomplish this goal alone. Extreme Hindutwa forces have the support of the corporate giants that rule the economy, the upper class lobby that drive the government machinery and the media that distort public opinion. If the present issues are what constitute the historic challenge faced by independent India, then all the democratic parties and factions must come together in the efforts to quash them. If the party continues to be skeptic and uncertain, then the dreams of the BJP will materialize as a reality in the 2019 elections.

Although the economic slump has for the time being, hindered the surge of Fascism, they would soon return to the scene with the help of fake propaganda, tainted lies and tricks to dupe the people as long as there is an absence of a strong Opposition that is capable of taking advantage of the situation. The issue with the Communist parties is not comprehending this fact or realizing the danger. Even though the power of the party has been deteriorated almost completely, Bengal is one of the three states where the Left Front could try their hand. There, the main opponent is the Trinamool Congress and not the BJP. Not only did the Left Front gain any benefits in the assembly elections by aligning with the Congress against Trinamool, but it was the Congress that secured at least a slight gain. Therefore the question that arises in this scenario is regarding the relevance in aligning with the Congress in order to fight the BJP.

BJP as earlier pointed out, is at the third place in Kerala. That too, much behind. Given that the UDF is the main opponent, it would pave way for the BJP to claim that they are the real Opposition if the CPI (M) aligns with the Congress. And it’s least likely to not influence a section of voters. Hence, rubbishing the possibility of a CPI (M) Polit Bureau- Congress alliance cannot be seen as something odd. Now, one has await the decision of the central committee. The party might repeat the stance of the previous Party Congress of not forming an alliance with the Congress and the regional parties in order to tackle the BJP. However, the possibility of local ‘adjustments’ would still remain. The possibility of deciding not to continue the policy of backing the Congress if it is the main opponent in constituencies where BJP leads in power, is least likely. At the same time, beyond the election politics, the CPI (M) should realize the possibility of an extensive and all-encompassing battle against Fascism in the social and cultural sectors.