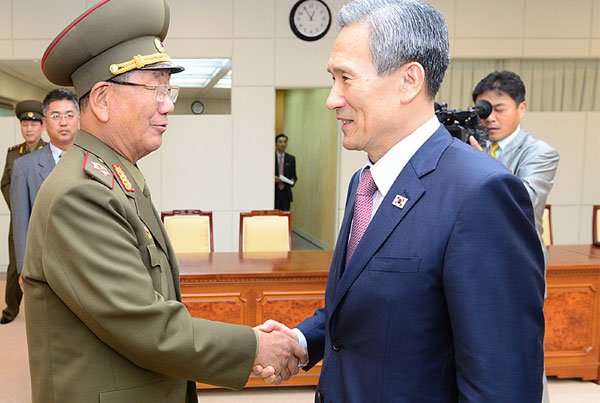 Holding hands with a smile; warm gestures of goodwill; embracing of two heads of nations crossing their boundaries - it was an end to the 65-year long enmity between the two Koreas and a war that has been technically continuing, because no official peace treaty was signed.

North Korean dictator Kim Jong Un and South Korean President Moon Jae-in met in Panmunjom signifying the most optimistic peace process of 21st century. The Korean Peninsula that was engulfed by darkness with provocative verbal attacks six months ago is now shining with the light of peace. It was the same Kim who earlier gave rise to trepidations with his missile tests and declared that he would turn Seoul into a graveyard, who now wrote ‘A new history begins now, at the historic starting point of an era of peace’ in the guestbook at the Peace House in Panmunjom, becoming an inspiration forever for everyone who attempts to resolve crises through diplomatic discourses. The decisions taken by the two leaders and their announcements to put an end to the Korean War, establish a permanent peace agreement and achieve complete de-nuclearisation of the Korean Peninsula, are all positive signs.

The road ahead to achieve a complete solution to all problems is long; and many are the obstacles to overcome. Among them, the stance of America is highly crucial. The future of the peace efforts will be based on the flexibility shown by the US in its political obstinacies during the summit between Donald Trump and Kim. It is impossible to guess how a summit would end between two persons who have already proved to be political leaders with no sense of diplomacy. . China’s stance is also crucial. For, the observation is that it is Beijing’s pressure and North Korea’s still unclear internal crisis which led Kim to the path of peace. It was after Kim’s China visit that the peace efforts came to light and they gained momentum. North Korea will stand firm in the path of peace only if the summits help in easing of the UN sanctions and opening the doors of international economic ties. The Peace House announcement is silent about economic cooperation. Japan has political displeasure over the Korean cooperation. Only when such political and economic problems are addressed properly, will the steps for resolving them be complete. A section in the US are apprehensive that the peace efforts that are being carried out by incorporating China and Japan as well might weaken its influence on the East Asia region. Both Koreas will have to endlessly continue the political maturity and diplomacy in order to survive their political lobbying as well. It may be recalled that it was due to the US stance that the bilateral talks in June 2000 and October 2007 went futile.

Whatever it is, the historic joint statement at the ‘Peace House’ is a stupendous victory of untiring efforts and diplomacy by South Korea. The efforts of Kim’s sister Kim Yo-jong are also worth mentioning. Starting from the Winter Olympics until now her presence has been crucial in North Korea’s present change in policy. Both the Koreas marching under one flag has ceased to be a dream impossible to achieve. The lines in the joint statement that ‘There is no reason why we should fight each other. We are one nation’ is reminiscent of Germany’s unification. Both the Koreas marched side by side under one flag at the recent Winter Olympics. A decision has also been made to send a combined team for the Asian Games that is scheduled to be held in Indonesia next year. There would also be mutual visits and reunions of the Korean families separated during the war and partition. It was the imperialistic desires post World War II that divided Korea into two countries with a Military Demarcation Line and border wall. Imperialistic interests post colonization also posed hindrances to the merging of both the nations that have no cultural and geographical differences. If the Korean peoples' aspiration for unification grows with the pine tree planted by the two rulers in the border of Panmunjom, and if that aspiration spreads like the plant's roots crossing the borders, the Un-In embrace will go down as a milestone in the history of peace.