Ensure their porridge, rather than our meal 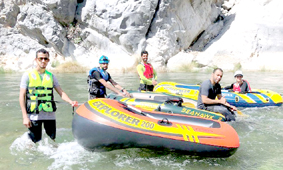 It was amidst the woes of the Keralites that they could not have their meals along with fish due to adulteration, that the Kerala High Court directed that trawling ban should be implemented in the case of country fishing boats also.

What paved way for the chemical-soaked fish to reach our dining rooms is the precarious situation where the fishery resources have depleted on a daily basis due to pollution, encroachment and ruthless marine robbery by the trawling boats. The trawling ban imposed on large boats during the monsoon season aiming to protect the fish stock by curbing fishing during the breeding period, has been receiving quite a big support from all quarters. However, it needs to be revisited whether applying the ban to smaller boats as well by placing them in this category, will bring relief. Given the fact that small scale fishermen who love the sea more than their own lives do not use purse seine nets, it will serve no purpose other than drive thousands of families deeper into starvation by keeping them too away from the sea.

It should be kept in mind that even during the period when the Indian fishermen are kept away from the sea, foreign fishing trawlers are incessantly continuing fish hunting. The traditional fishermen folk in India are a most neglected community. Whenever every high profile scheme is announced, it is these innocent people who are forced to pay for that with their lives and livelihood. The fishermen society has no means of livelihood other than the sea. They are kept away from the shores in the name of tourism, development and defence. However, on the other hand, they do not receive any of their benefits. Things are no different in Kerala where 17 per cent of the country’s fishermen reside. There have been no sincere attempts from any corner at any time for their social, cultural and economic uplift. Most of the funds announced to restructure their lives and dreams – which were shattered following the Tsunami one and a half decades ago - were squandered on renovating the roads in districts without sea. The Tsunami survivors in areas like Edavanakad and Arattupuzha still live in misery. And when Cyclone Ockhi struck the shores of Kerala, the wounds inflicted by the Tsunami were still not healed. Even then, it was the hapless fishermen community alone that lost everything.

State Fisheries minister, who welcomed the High Court order, said that because traditional fishermen do not engage in trawling, it will not affect them. In that case, the government should be prepared to secure such an assurance from the court and allay the anxiety of the fisherman. In the absence of that, a misinterpretation and misuse of the directive is guaranteed. Already, the fishing labour union leaders have declared that if their entry into the sea is blocked, they will resist it. They are wont to take such a stance, because while we are complaining about missing fish in our meal menu, they are talking about their poverty.