Stop vaccinating children, donate doses to poorer countries: WHO to...

The lessons from Fani 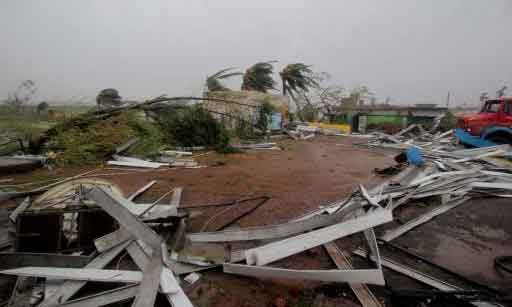 It is no small relief that Fany,  the fiercest cyclone India has seen in the last two decades,  has weakened and crossed our borders,  though not before causing havoc and heavy casualty in Odisha and Andhra. Reports indicate that it will take Odisha everal months to recover from the losses caused by the cyclone, which killed 29 people and brought damage worth billions of rupees.    Naturally, it was one of the most massive evacuations in histsory that Odisha witnessed last week.

Within 24 hours,  the state government moved 12 lakh people from their homes to relief camps.  In the districts of Puri where the storm brought huge destruction, and Khordha of capital Bhubaneswar,  it will take at least a week to restore water,  electricity and mobile connectivity.    Power sector alone suffered  damage of  Rs 1,200 crore.   Further in West Bengal 131 grama panchayats where winds were feared to cause heavy damage,  more than half a lakh of people were evacuated.  When Fany weakened and got diverted,  the consolation felt there was no small.

Even as the Odisha government of Naveen Patnaik reassures that people in the state will be provided alternate residence and means of living,  there is no clear-cut path of disaster relief in front of the government.   It is laudable that other states including Kerala have come forward with offer of help.  But as Keralites very well know from their own experience of flood last year,  mere assistance will hardly suffice to bring ashore a state which has sunk in loss of houses,  huge assets of cattle  and means of living.  In this matter,  both Odisha and West Bengal deserve more sympathy and compassion from the Centre and states.

What mitigated the scale of the disaster - that would have caused more loss of lives -  were the far-sighted measures taken by the state government.   Another cyclone 20 years ago, that lasted 30 hours,  had wreaked havoc and taken the lives of over ten thousand people.    Taking a lesson from this terrible experience,  the state government adopted a method of systematically evacuating people from areas thforecast to be affected by the disaster, to safe locations right from the last week of April when meteorological sources had released warnings.   With the support of a fifty thousand –strong voluntary force,  the state government was able to put in place 9,000 rescue camps,   and take orderly preventive steps as demanded by the weather that changed every minute. And this was what forestalled huge loss of lives.

India Meterological Department (IMD) and the state government were lauded for such efforts by officials of the UN Disaster Risk Reduction,  the body under the UN for disaster relief.   They remarked that it was the meticulously implemented safety mechanisms by accurately  following of the weather warnings that saved Odisha from massive loss of lives.   The UN body assesssed that it was a model method of foreseeing the magniture of the disaster in advance without any loopholes.    Such advance preparations should open the eyes of those including Kerala,  where the warngling about the flood disaster is still going on.

Although preventive rescue measured reduced the loss of lives,  there is no doubt that it will take long for Odisha to restore its former normality.    The middle and poor classes have virtually lost their homes and jobs.  The destruction of rab crops and cattle assets will seriously affect their livelihood.  The disaster-affected people have been allowed 50 kilograme of rice,  2,000 rupees in cash and polythene sheets to put up a roof,  as immediate relief.    But in order to bring up the lives of the people to the pre-cyclone state, systematic rehabilitation work is a must.    The state by itself cannot afford it without a generous aid from the Centre.  It needs to be ensured that the prime minister's assurance that every possible aid will be given for reconstruction,  will not turn out to be yet another election promise.

There is no meaner act than to use disasters for political ends.  However,  probably because of the election backdrop,  the central and state governments look like exploring if anything can be harvested from the wind of Fany.  Prime minister Narendra Modi,  who got in touch with Odisha chief minister and the governor over the phone following the disaster,   has declared that he would visit Odisha today (Monday).   There is little doubt that the prime minister's arrival on the very day of polling is with an eye for vote.

In this matter,  the approach taken towards West Bengal leaves no room for doubt.  Modi chose not to call chief minister Mamata Banerjee on the subject and instead checked the situation with the governor,  his own man.   One cannot blame Mamata and Trinamool Congress for raising the complaint that the prime minister's partisan approach was against the federal character to be upheld by the country.   In times of natural disasters and human tragedy,  the urgent need is the ways not to win political gains,  but to mop the tears of the disaster-affected and to bring them relief.   The shining thing that stands out in this context is the presence of mind shown by Odisha in facing the crisis.   Let the politcal leadership and governments move along the same track.