It is Congress of course; still…… 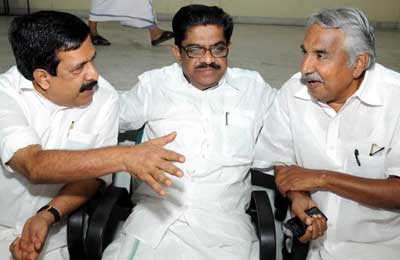 India celebrated its 71st Republic Day while the secular, democratic, socialist India is in an unprecedented upheaval.   It is patent why the majority of citizenry with a conviction about secular democracy and religious minoritites came out on the streets with a firm NO to moves by the extremist Hindutva forces in power who enacte the Citizenship Amendment Act (CAA) which put the citizenship of the largest minority of the country in doubt,  and took the initial steps to implement a National Register of Citizens (NRC)  and National Population Register (NPR) in the same context.

If the agitation - which  sprouted spontaneously from among university students, with virtually no leadership and without any initiative by a political party,  and which developed into national popular protest -  fails in its mission,  it will spell the defeat not only of that agitation.   On the other hand it will toll the death knell of secular, democratic India itself.  It is as clear as daylight that the sangh parivar is going whole hog with its anti-constitutional agenda to repress the anti-CAA protest. The very fact that the Modi-Shah combine,  despite the widespread protests,  went ahead by framing the rules to implement CAA,  makes it clear that the duo is in no mood to budge.  They are perhaps under the illusion that even though the agitation is currently being fought with the active participation of other sections than minorities alone,  in due course it will get shrunk into a demand and strike by the minorities.  As many in the Opposition made clear,  it is upto the secular parties, especially the key Opposition party Congress,  to prove that such an optimism of the government is out of place.  If the leaders of the Congress,  who are active in the scene of protests,  can be relied upon,  the party will have to come to the theatre of action with redoubled vigour and determination.

However,  even as the uncertainty about the national leadership of Congress is getting prolonged indefinitely,  in Kerala,  which sent the highest number of MPs from a state in the last Lok Sabha election,   the ructions and wrangling about KPCC office bearers are continuing unabated.   Even when the party's state level  leaders approached the national leadership (the high command) with jumbo lists of state leadership panels, driven by varying considerations,  the high command was not ready to accept them as such.  It is believed that this happened mainly because the state president Mullappally Ramachandran stood firm in his stand against such jumbo lists and insisted on the one- man-one-post norm.  That being so, now that a preliminary 50-strong list of office-bearers consisting of the current president, 12 vice presidents,  34 general secretary and two working presidents, has been approved,  it should have put at rest the discontent.  But not this did not happen,  observers of happenings even sense that the disenchantment and obstinacy of factions and individuals concerned are intensifying further.

One senior leader is piqued by the step of having made a former BJP candidate, who returned to the Congress subsequently,  being hoisted as the vice president.    The Youth Congress is unhappy about ignoring the youth and the Mahila Congress  is in protest against ditching women entirely.  All this is likely to soften when the second list gets out.  Still, although senior leader AK Antony has appealed to maintain discipline within the party,  and the president  Mullappally Ramachandran has cautioned that the party would not brook indiscipline of any kind,  and announced the formation of  a discipline committee,  one cannot shed the certainty about of one thing:  this is Congress after all!,  a collective with a long tradition of groupism,  internal rifts,  defections and switching of loyalties.  But the groups involved take umbrage under that very fact.  The current situation is that the people need the Congress whereas the leadersare in their own personal pursuits and after their family's interests.  After the historic defeat in the last Lok Sabha election,  the party that got nationally orphaned was able to capture power in subsequent assembly elections.   Even after leaders defected in large numbers to the BJP,   in Maharashtra a share in power came in search of the Congress.  In Jharkhand,  where the most recent election was held, the Congress-led coalition came to power.  Earlier,  a few months prior to the Lok Sabha election, the party had won in Rajasthan,  Madhya Pradesh and Chhattisgarh.

This is a time when the Congress should get equipped for the very revival not only of itself,  but also of the country, if it has the confidence about its ideals and positions and if it is aware of the timely role it has to play.  As for Kerala,  elections are nearing first to local bodies and soon thereafter to the state assembly.   The leading ruling party,  CPM through its all out involvement in the anti-CAA struggle, is doing all it can to ensure minority community support.  At this critical juncture,  the state is eagerly watching to see if the Congress leaders rise above personal interests,  shed unbridled ambitions of groups,  and lead the party with a little more seriousness and equanimity.