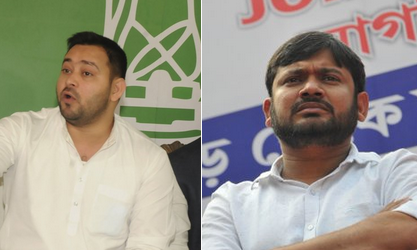 New Delhi: The Congress-led alliance is pitching leaders from Bihar to woo the migrant voters in Assam, who have a significant presence in more than two dozen Assembly constituencies.

Tejashwi Yadav, Leader of Opposition in the Bihar Assembly whose party is contesting on one seat, addressed three rallies on Saturday, which drew good crowds. He campaigned for Congress candidates - Sambhu Singh Mallah in Ratabari, Kamkhya Prasad Mala in Dholai, Mukesh Pandey in Lakhipur and Sashi Kanta Das in Raha. Tejashwi said: "People are fed up with the BJP's double engine government in Assam. Our alliance is committed to progressive, inclusive, development and welfare oriented government in the state."

Seeing the crowds at the rallies, the Congress leaders say that this surely will pave the way for their government.

Congress observer and MLA for second term from Kadwa in Bihar, Shakil Khan is coordinating for the party in Assam and is trying to woo the migrants towards Congress. Shakil Khan speaking over the phone from Guwahati said, "I am confident that Congress will get more than 70 seats as the BJP government has been mired in corruption and did not do anything except dividing the state on non issues."

The party is banking on 'five guarantees. in the state which includes five lakh jobs for youth. Party General Secretary Jitendra Singh said, in a tweet, "Assam's tea workers deserve a life of dignity, much like their tea gardens enveloped with bright shades of intense green, Congress five Guarantee will reinstate the colours of a dignified life, very soon!"

The Congress is leaving no stone unturned to cash in on the anti-CAA sentiments of the local people and over the low wages of the tea estate workers.

The 126-member Assembly will go to the polls in three phases, the first phase voted on March 27 (47 seats), which saw a huge turnout and the second phase is on April 1 (39 seats) and April 6 (40 seats) in the third phase. The results will be declared on May 2.