Ban on parading of elephants has temple organisers in a fix 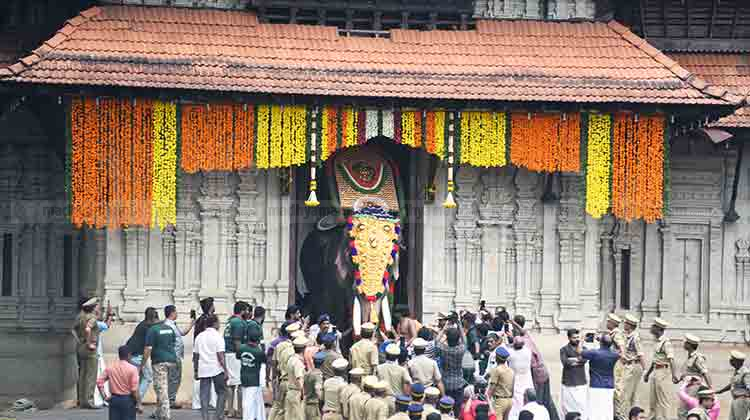 Thrissur: With just three days left for start of the famous 'Pooram' whose main attraction is a parade by caparisoned elephants, organisers are in a fix over its successful conduct due to a ban on parading them in daytime to protect them from heat wave.

The main attraction of the festival is Kudamattam (change of colourful umbrellas on mounted elephants) of Thiruvambady and Paramekavu Devaswoms and parading of the pachyderms.

Organisers fear the ban by the forest department, among other new rules, would take away the sheen on this year's edition on April 21.

The Wildlife Department recently banned parading of jumbos during festivals between 11 AM to 3.30 PM and also said they should not be paraded more than six hours continuously and at night and should be given rest the next day.

President of Thiruvambady Devaswom, Prof Madhavankutty and Paramekvu Devaswom President, K K Menon said parading of elephants and Kudamattam would be held as usual and the festival would be celebrated in a grand manner.

Madhavankutty said the matter has been taken up with Chief Minister Oommen Chandy.

The rules state organisers should keep onlookers at least three metres away from the elephants and ensure they do not touch the animal. Drunk mahouts have also been barred from managing elephants during festivals.

Restriction of jumbo carnivals and not increasing the number of elephants in existing festivals from that fixed earlier have also been suggested.

Thrissur pooram is celebrated every year in the month of Medam (mid-April to mid-May) as per the Malayalam calendar.

Legend has it that the Pooram originated in 1798 through a royal edict of the then Raja Rama Varma, popularly known as Shakthan Thampuran, a powerful ruler of the erstwhile princely state of Cochin.

The edict entrusted Paramekkavu and Thiruvambady temples as the main sponsors of the festivities.

On April 21 this year, colourful pageants led by caparisoned elephants from temples in and around the city will wind their way to Vadakkumnathan Temple. They will later converge at the sprawling Thekkinkadu maidan before noon where 'elanjithara melam' (drum music in front of "elanji" tree) will be performed in which artistes play drums, pipes and cymbals for hours on end.

Thousands also witness the colourful kudamattom, where 30 elephants line up face to face after which there is a display of ornamental parasols by people mounted on the pachyderms in quick succession.

The pooram ends with a spectacular fireworks show early the next day.