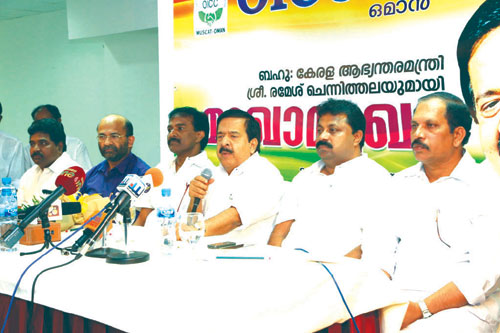 Thiruvananthapuram: KPCC president Ramesh Chennithala has said there are no differences between him and Chief Minister Ommen Chandy over the government's move to take over the Pariyaram Medical College.

“What I had said to consider M.V Raghavan’s stand too when taking a decision over Pariyaram Medical College takeover,” Chennithala told reporters here on Friday.

In direct contradiction to what the KPCC president had stated after visiting the house of M V Raghavan, Chief Minister Ommen Chandy Thursday said the process for taking over the Pariyaram Medical College was progressing and the District Collector of Kannur had been asked to make an evaluation of the assets and liabilities of the medical college as part of it.

M V Raghavan-led CMP had expressed its discontent in the UDF meet over the government move to take over Pariyaram Medical College (PMC) from cooperative sector.