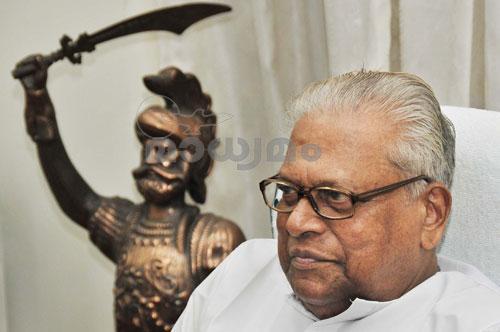 Thiruvananthapuram: Leader of the Opposition V.S Achuthanandan on Sunday extended a warm invite to JSS leader KR Gowriyamma to the LDF.

In response to JSS State committee’s decision in favour of severing the party’s ties with the United Democratic Front (UDF), Achuthanandan has said he is happy to welcome KR Gowriyamma into the LDF fold.

Saying that it is his personal view, Achuthanandan has also said it is the LDF that will take a decision on the matter after evaluating the political situation.

“Many had earlier quit from the UDF and joined the LDF. Gowriamma's entry too is welcome,” he said.

UDF partner Janathipathiya Samrakshana Samithy (JSS) led by KR Gowriyamma on Saturday sent out signals that it was not interested in remaining in the Congress-led ruling coalition as its sentiments had not been respected.

Announcing the decision of the State committee, party State president A.N. Rajan Babu, in the presence of party founder and general secretary K.R. Gouri, Saturday said the party would be part of the UDF till August and participate in UDF meetings till then.