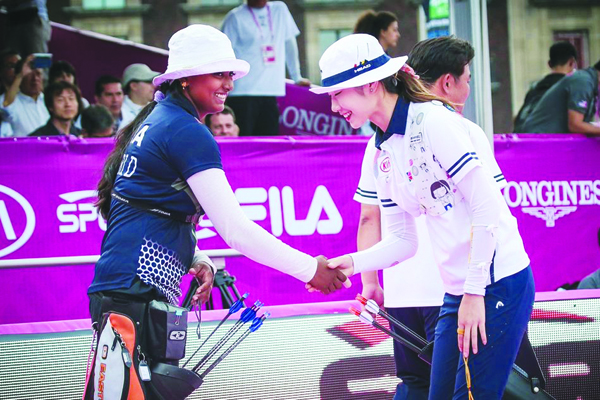 Hull (England): Dipika Pallikal reached the pre-quarterfinals at the Allam British Open Squash Championships after edging out Denmark's Line Hansen in the longest match of the tournament so far.

However, Indian challenge in the men's competition ended with Saurav Ghosal losing his pre-quarterfinal to fourth seed Gregory Gaultier 8-11, 13-11, 7-11, 0-11 at the KC Stadium here Wednesday.

"Lost 1-3 to Gregory. Best I've played against him but fell short unfortunately! Thank you to the big Indian contingent for their support," tweeted Ghosal minutes after his loss to the Frenchman.

The good result for India came Tuesday night at another venue, Ponterfact, nearly 50 miles (80 km) away from here.

The Indian said she was lucky to get over the line against 22nd-ranked Hansen in the first round match played Tuesday night.

"I was not as patient as I could have been for most part of the match. She (Hansen) has improved a lot and I knew it would be a tough match," Pallikal told IANS.

"In the deciding fifth game, I told myself to stay patient and stay on there in the rallies. And that helped."

Pallikal next plays local favourite Laura Massaro Thursday and she knows she will have to come up with something special against the number two seed. She will also have to adjust to the outdoor conditions. All matches from Wednesday onwards take place at an outdoor glass court.at the multi-purpose KC Stadium.

"For starters, I would have to be a lot more patient than I was in this game. The venue is an outdoor one so the balls are going to be more dead, and I have to choose the right one," she added.

Pallikal last played against Massaro at the 2012 Australian Open semi-finals where she lost after leading 9-5 in the decider.

The British Open is the world's oldest tournament which makes a return to Yorkshire after almost 40 years.