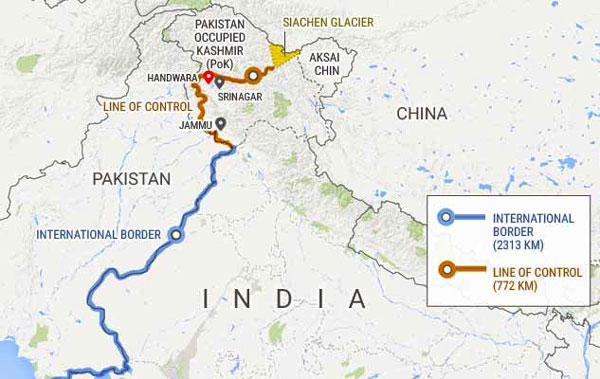 Srinagar: A Jammu and Kashmir Police constable and three separatist guerrillas were killed in a day-long gunfight between security forces and the militants in Pulwama district Monday, a defence official said.

The gun battle in Madoora village of the south Kasmir district ended in the evening after security forces killed all the three militants hiding there.

"An operation was launched in Madoora (Tral) village of Pulwama late last (Sunday) night based on specific intelligence obtained by army and police about the presence of three terrorists in the village," a defence spokesperson said here.

All the three were killed while casualties on the security forces' side included the Special Operations Group (SOG) personnel and two Central Reserve Police Force (CRPF) troopers who were killed, and one policeman who was injured.

The spokesperson said specific intelligence was received by the Rashtriya Rifles as well as police about presence of three terrorists in Madoora, and the operation, carried out by soldiers along with police and CRPF personnel, was "launched at 2.30 a.m. and the cordon was in place by 3 a.m.".

"At about 5.30 a.m. despite warnings to surrender, terrorists opened heavy volume of fire on the security forces, resulting in a gunfight which continued for hours with intermittent pauses."

"At about 5 p.m. due to the heavy fire fight, the house in which the terrorists were holed up caught fire. Later, on clearance of the debris, the bodies of the three terrorists along with arms and ammunition were recovered," the spokesman said.

He stressed that the security forces despite coming under heavy volume of fire exercised maximum restraint and gave adequate opportunity to the terrorists to surrender.