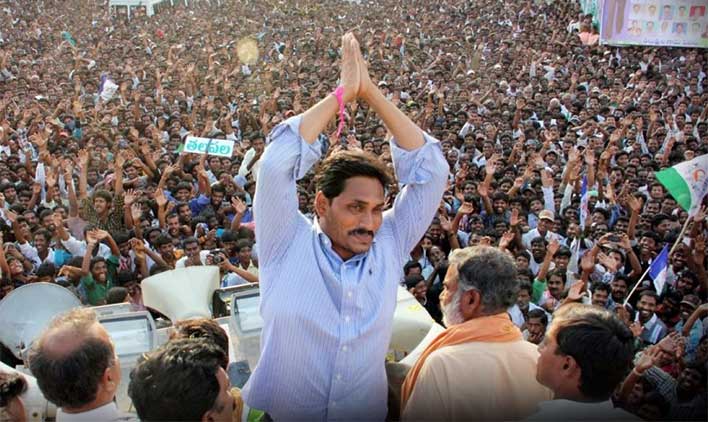 Hyderabad: Doctors at a hospital here Saturday forcibly administered intravenous fluids to YSR Congress party president Y.S. Jaganmohan Reddy, who was on indefinite fast for seven days to oppose bifurcation of Andhra Pradesh without justice to all regions.

On the direction from Chanchalguda Jail officials, doctors at Nizam's Institute of Medical Sciences (NIMS) forcibly gave intravenous (IV) fluids to Jagan as his condition was deteriorating, a hospital official said.

Jagan, as the MP from Kadapa is popularly known, was shifted late Friday night to NIMS for better treatment but he had refused to end the fast.

Jagan's wife Bharati was by his side when doctors administered IV fluids to him. She reached hospital after the CBI court permitted her to stay with him daily from 8 a.m. to 4 p.m.

Earlier, amid tight security, Jagan, who is in judicial custody in a disproportionate assets case, was shifted from Osmania General Hospital to NIMS.

A team of eight doctors is monitoring the condition of the young leader, who may have to remain in hospital for two to three days.

As the sugar and blood pressure levels had considerably come down and ketone bodies in urine were high, doctors had advised him to agree to take intravenous fluids.

The doctors had warned that his condition may further deteriorate if he continued his fast.

On Friday night, Jagan's mother Y.S. Vijayamma, wife Bharati and brother-in-law Anil Kumar were not allowed to meet him. They left the hospital after seeing him from a distance.

The MP was only drinking water since he began his fast in Chanchalguda Central Jail Sunday. He was shifted to Osmania Hospital Thursday night.

Vijayamma, who is also honorary president of the party, and other party leaders had Friday appealed to him to call off the hunger strike.

Jagan is in jail since May last year in a disproportionate assets case.