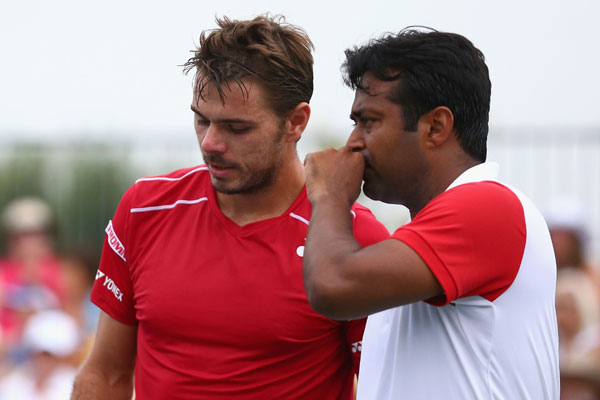 The Indo-Czech pair had avenged their defeat last year in the title clash by the American twins, beating them in three sets 6-3, 3-6, 6-4 here at Flushing Meadows Thursday.

Paes, who is in line for his eighth men's Grand Slam men's doubles title, and Stepanek denied top seeds Bryans a calendar Slam, the first since 1951, and a fifth major in a row. Thus came to an end a 28-match winning streak of the Americans.

The last pair to accomplish a calendar Grand Slam was Australians Frank Sedgman and Ken McGregor.

Paes, who won the US open twice with two other Czechs Martin Damm in 2006 and Lukas Dlouhy in 2009, and Stepanek, will now take on Austrian Alexander Peya and Brazil's Bruno Soares who put out Croatian Ivan Dodig and Brazilian Marcelo Melo 7-5, 6-4, in the other semifinal.

Paes, who has also won six mixed doubles Grand Slam titles, has yet again proved that at 40 he is still the most durable doubles player on the circuit.

Paes played a key role in the victory as his partner had problems holding his serve. His deft touch play and alacrity at the net baffled the Bryans, more so in the decider when they were down 1-5 after a double break by the Indo-Czech pair.

Stepanek, however, steadied himself in the 10th game and made sure there were no hiccups even after the Americans staged a smart rally by breaking Paes's serve.

Mike and Bob were 4-3 up head-to-head coming into the match and the way they started taking the first set, winning 19 of the 20 points on first serve for a 95 percent record, they looked like on course for creating doubles history as Paes and Stepanek struggled to win 14 out of 23.

In a dramatic twist, Paes and Stepanek breezed through the second set and were on a song in the decider.

Their inspiring play and a jig after winning every game rattled the winners of the 15 Grand Slam titles.

"It came natural and we have fun on the court. Whatever comes comes, tomorrow it could be something different," Stepanek said.

The Bryans became the first pair to hold all four majors at the same time when they claimed the Wimbledon title. Last year, they added the London Olympics gold to their impressive list of wins.

Paes, a losing doubles finalist here on four occasions, was all praise for the Bryan brothers, describing them as great ambassadors for American tennis.

"I have tremendous respect for the Bryan boys, they are great ambassadors for American tennis," said Paes.

The champion doubles player paid a handsome tribute to his partner, saying in Radek he has a great partner.

"He fought his way back after a spinal surgery four months ago and it was a tough year for him. So when we play together we feel anything is possible.'