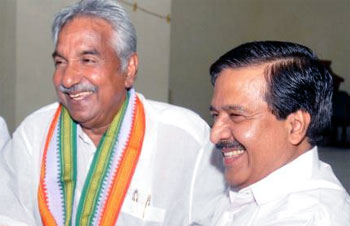 Thiruvananthapuram: In a move aimed at boosting the Congress ' stock in Kerala ahead of the Lok Sabha polls, KPCC President Ramesh Chennithala is set to join the UDF Ministry headed by Oommen Chandy Wednesday, as directed by the party high command.

Ending all suspense, Chandy said that Chennithala would be sworn at 11.20 AM Wednesday at the Raj Bhavan.

Though Chandy said the portfolio to be given to Chennithala would be announced after the swearing in, signals from the Congress circles is that he would be allocated Home.

"There have been discussions about Chennithala's induction in the ministry for quite some time. His joining the ministry will definitely strengthen the Congress and the UDF," the Chief Minister said.

Congress in Kerala strongly believes that induction of 57-year-old Chennithala will help Congress firm up its support base among the majority community in general and the Nair community in particular to which he belongs to.

Influential Nair outfit 'Nair Service Society' (NSS) had in the past had come down heavily on UDF alleging that the coalition leadership breached its poll-eve promise of giving Chennithala a "key position" in the cabinet, in which nominees from Christian and Muslim communities outnumber those from various Hindu sections.

The idea to rope in Chennithala, mooted by the party high command, was endorsed by the state unit yesterday after senior leader and Defence Minister A K Antony conveyed it to a leadership meeting attended by Chandy, Chennithala and others.

Chennithala said in Alappuzha that he had been directed to join the Ministry by high command and he would abide by that.

He said it was for Chandy to decide on the portfolio to be given to him, but Congress sources said in all probability he would get Home, replacing incumbent Thiruvanchur Radhakrishnan.

Chennithala will continue as the KPCC chief for the time being and Radhakrishnan will be retained in the cabinet with another portfolio.

There could be a reshuffle of Congress ministers and a new KPCC President would be chosen after the conclusion of the budget session of the state Assembly, beginning on January 3.

However, giving a cold reaction to the development, NSS General Secretary G Sukumaran Nair said "who is becoming Minister or who is being dropped is none of NSS's concern."

Ever since the UDF wrested power from the LDF in 2011, though with a thin margin, Chandy had said Chennithala could join the cabinet any time.

But Chennithala, identified with the "I" group in local Congress parlance, has stood firm that he would not join the Ministry unless he was given a plum portfolio like Home.