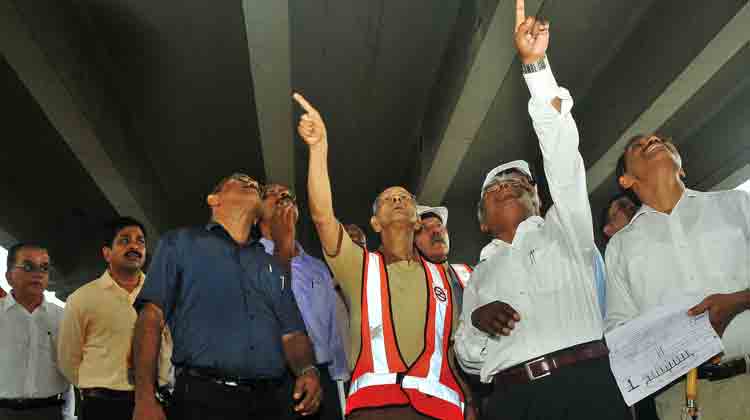 "Our problem is basically delay in taking government decisions and bureaucracy is responsible for it. We don't have self confidence to take bold decisions," Sreedharan, former managing director of Delhi Metro, said.

Giving an example of good work done by Modi's administration in Gujarat, he said, "the factory in Salvi in Vadodra district of Gujarat for producing metro trains was set up in record time of 18 months."

Sreedharan was speaking to reporters before an event organised by the Japan Embassy to felicitate him for his contribution in "strengthening Japan's presence in India and to promoting friendly relations between Japan and India through the Delhi Metro project."

Also present at the event was former Delhi Chief Minister Shiela Dikshit besides parliamentarians N K Singh, Ashwini Kumar, and Tarun Vijay. Sreedharan, who received "the Order of Rising Sun, Gold and Silver Star" by the Government of Japan on November 3 last year, thanked Japan for its financial and technical support in the construction of Delhi Metro.

"Metro became resounding success because of two things -- soft loan from the Japanese government and the unstinting support we received from the Delhi and Central government", he said.

When asked about the controversies regarding a tiff between Centre and DMRC, Sreedharan said, "after I left, there is a general feeling that DMRC is not getting the same support it used to get from the Centre". He, however, said the relationship with the state administration is "fine".

Stressing on the need for high-speed trains in India, the former Delhi Metro head said such trains are inevitable in a place like India where there are long distances to cover. These (high-speed trains) should have been a reality 10-15 years ago, he added.

Sreedharan also praised Dikshit and her government for "unstinting support" to the Delhi Metro project. "We were fortunate that we had Shiela Dikshit as CM. We had no difficulty whether in terms of money or land or anything else," he said, adding, he hoped she will now be able to give her support as Kerala Governor to the Kochi Metro project.

Regarding the last mile connectivity problems in the city and the uncertain future of Monorail, Sreedharan was of the view that the Monorail is inevitable and that more and more trains need to be brought.

"Increasing the coaches will not solve the problem. We have to expand the network", he said. Japan's Ambassador to India Takeshi Yagi said the Delhi Metro was a stunning example of Japan-India partnership and that Sreedharan is instrumental in the entire process of the project. "Sreedharan rightly deserves the title, 'Metro Man'.

Delhi Metro is the enduring symbol of friendship and respect between the two countries," Yagi said.

Dikshit also praised Sreedharan's role in the project and termed it as one of the most remarkable achievements of Delhi.