Poll fever catches up; Stiff contest on cards in Kozhikode 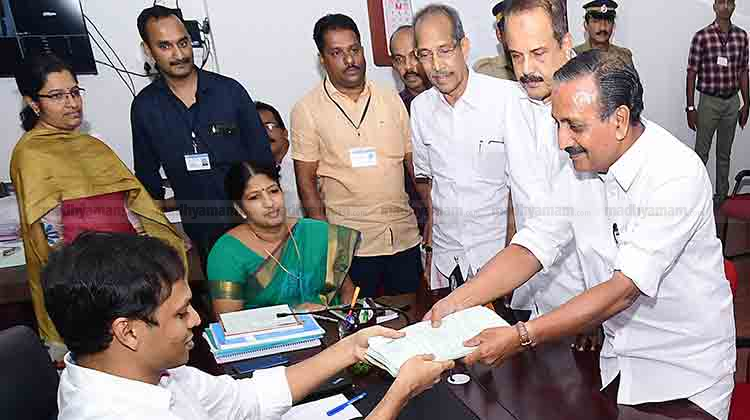 Kozhikode: With hardly a week to go for polling, the Kozhikode Lok Sabha constituency is witnessing a high voltage campaign by the key contestants- sitting MP M K Raghavan (Cong) of the UDF and CPI-M's A Vijayaraghavan of the Left Democratic Front, making it one of the prestigious contests in North Kerala.

BJP is also in the fray fielding one of its senior leaders and former State President C K Padmanabhan.

The 2009 polls witnessed a neck-and-neck affair, between the UDF's M K Raghavan and LDF's P A Mohammed Riyas, before the former sneaked through with a slender margin of 838 votes.

The sizeable lead Raghavan got from the Koduvally Assembly segment helped the UDF in the race.

However, in the 2011 Kerala Assembly elections, the LDF won the four Assembly segments of Elathur, Kozhikode North, Beypore and Kunnamangalam.

UDF is playing the 'development' theme to ensure a comfortable victory for its nominee, while LDF is focusing on the 'restore Kozhikode's pride' theme to wrest the constituency through Vijayaraghavan, a two-time MP and CPI-M Central Committee member.

Electioneering has picked up momentum with the arrival of national leaders of both the fronts.

Raghavan said his re-election was the need of the time to ensure continuity of the already undertaken development projects in the constituency.

"I will draw a master plan for the development of the city, which includes infrastructure development, better transportation, rail and road connection," he said.

On the other hand, Vijayaraghavan said a third alternative other than the Congress and BJP will have the majority in the Lok Sabha this time.

"People are fed up with the neo-liberal policies of UPA-II and the communalism propagated by BJP," he said.

He said he had also plans to implement a special programme for the protection of waterbodies that will be a model for the country.

Taking on the Congress-led UDF and the Left, Padmanabhan alleged that the Congress and Communist parties were now moving hand-in-hand to fight the BJP.

The next government at the Centre would be one led by Narendra Modi and the fulfilment of the developmental aspirations of a constituency would be accomplished only with a people's representative from the same front, he said.

Besides the three key contestants, there are ten more candidates including K P Ratheesh (AAP) and K P Velayudhan (BSP) trying their luck.