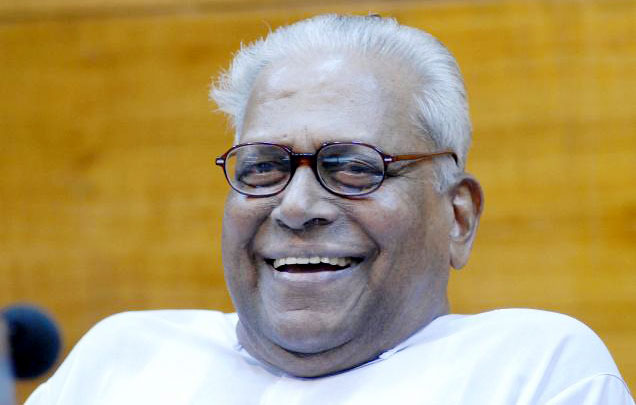 Kochi: The UDF government opposed the plea of veteran CPI-M leader V S Achuthanandan seeking a CBI inquiry into the Solar panel case at the High Court on Monday.

Saying that the Opposition leader has no right to seek a CBI probe into the case, Advocate General K P Dandapani submitted that the public exchequer had suffered no loss in the case.

His plea seeking a CBI probe is not valid as he had not lost any money in the scam, the government submitted.

The CPI-M leader’s counsel contended that the police team that probed the case had not examined the CCTV clips, phone calls and the matters mentioned in the complaint of Sreedharan Nair.

The court said that it would assess the validity of the petition later. It also asked the government to submit the case details and other documents related to the case.

The petitioner had sought a probe involving enforcement directorate, corporate affairs department and IT department.

Achuthanandan in his petition submitted that a fair and impartial enquiry was required in the solar case to inspire confidence among the public regarding justice delivery system.

The money trail involved in the case has to be found out in the interest of the state's economy, he said.

The Leader of the Opposition in the assembly also sought an investigation into the alleged sabotage of the statement given to the magistrate court here by one of the prime accused, Saritha S Nair.

The earlier investigation by crime branch was not impartial, he contended adding no effort was taken by the investigating team to trace the amount collected by the accused.

The scam involving a fraudulent solar company-- Team Solar - had taken a political turn after a personal aide of Chief Minister Oommen Chandy was arrested, for his alleged links with the accused who allegedly duped investors huge sums by promising solar panel solutions.

Two other personal staff of Chandy's office were also removed in connection with the scam, sparking demands for his resignation from the CPI-M-led LDF.