BJP to crush Congress in battle for India: exit polls 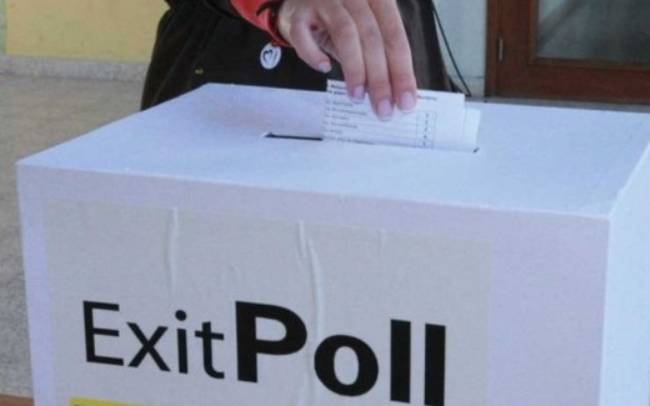 Three of the four exit polls Monday night estimated that the Bharatiya Janata Party-led National Democratic Alliance would get 272 to 289 seats in the 545-member Lok Sabha, leaving the Congress bruised and battered. Actual results would be declared after ballot counting on May 16.

The India Today-CICERO and the ABP-Nielsen exit polls predicted 272 or more seats for the NDA.

Even before the exit polls sent a wave of joy in the BJP camp, a confident Modi, 63, said in a tweet: "India has won. The power of ballot has won."

While the India Today-CICERO gave the Congress-led United Progressive Alliance (UPA) 115 seats and other parties 156, the ABP-Nielsen tally for the Congress grouping was 110.

Projections by India TV-CVoter put the NDA on top with 289 seats and the UPA far behind with 101. Other groups were projected to get 148 seats and the Aam Aadmi Party (AAP) five seats nationally.

The ORG-TimesNow exit poll, however, gave the Congress-led UPA a slightly higher 148 seats and the BJP-headed NDA 249 seats. Others were said to bag 146 seats.

Going by most projections, the Congress - born in 1885 and India's oldest political party - could end up with its lowest tally ever in the Lok Sabha -- perhaps in just two figures. Its lowest tally was 114 in 1999.

The BJP, which turned aggressive after Gujarat Chief Minister Modi was named its prime ministerial candidate, said the exit poll findings were on expected lines.

But its leaders insisted that the party was sure to get a comfortable majority in the Lok Sabha along with its allies and that it would surprise everyone even in states where it has been traditionally weak.

BJP spokesman Prakash Javadekar told IANS: "The exit polls largely reflect the reality on ground though we feel we will get more seats."

He underlined that the BJP's sweeping gains -- it had ruled the country for six years till 2004 when it was voted out -- were mainly due to Modi's leadership.

Added his colleague Mukhtar Abbas Naqvi: "Wherever we went campaigning, it was clear that people wanted Modi to lead the country."

The exit polls gave the BJP and its allies far more seats than the Congress in northern, western and central India. Only parts of the south, especially Kerala and Karnataka, held hope for the Congress.

ABP News-Nielsen said the BJP would make huge gains in the populous states of Uttar Pradesh, Bihar and Maharashtra which together account for 168 crucial Lok Sabha seats.

According to it, the NDA would get 46 of the 80 seats in Uttar Pradesh and 21 of the 40 seats in adjoining Bihar.

A fourth exit poll, on CNN-IBN, said the BJP was expected to do unusually well in West Bengal and Tamil Nadu where it has always been weak.

The BJP was also on the victory lap in Haryana, Uttarakhand and Himachal Pradesh, exit polls said.

Monday marked the end of India's staggered Lok Sabha election in which a total of 66 percent of the 814 million electorate voted over 10 rounds. It was the highest voter participation ever.

The constituency which drew most interest nationally was Varanasi where Modi was a candidate, challenged by AAP leader Arvind Kejriwal and Ajay Rai of the Congress. The turnout was so heavy in Varanasi that some voters complained that stood in queues for as long as four hours.

Barring stray clashes and allegations of voter intimidation in parts of West Bengal, Monday's voting too passed off peacefully in a tribute to the world's largest democracy.

Monday saw a key index of the Bombay Stock Exchange closing at an all-time high, just before exit polls poured in, gaining over 550 points or nearly 2.5 percent intra-day.