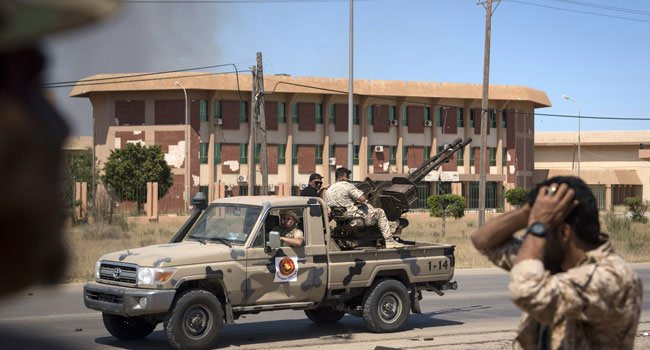 Russian Foreign Minister Sergei Lavrov and his Turkish counterpart Mevlut Cavusoglu hold a joint press conference following the talks on a ceasefire deal between the warring sides in Libya, in Moscow on January 13, 2020.

Even after freeing it from the 42 years of dictatorship under Muammar Gaddafi, Libya is still under crisis.

The country had witnessed violence, tribal clashes, deadly attacks against international organizations, destruction of Sufi religious sites, kidnappings for financial and political reasons, and targeted killings of former Gaddafi security officers. The law and order situation is at its weakest state. The ongoing human rights violation is on a hike. The rows between rival militias in Tripoli over the past three weeks and bloody clashes between Islamists and the army in the eastern city of Benghazi have further deepened the crisis. Several countries are evacuating their nationals and diplomatic staff from the strife-ridden areas.

Kerala Chief Minister, Oommen Chandy had also appealed to the citizens to return to their home country. Malayali nurses stranded in the war torn country have been coming back in batches. The nurses, working in various hospitals in Libya, had reached Tunisia, from where they reached Dubai to take the scheduled flight to Kochi. Fifty eight of the nurses had reached Tunisia from Tripoli two days ago, of which 43 arrived on Tuesday. The rest of them reached on Wednesday at Nedumbasseri International airport by Emirates airlines. The tickets have been sponsored by the central government. The State government would be giving a cash assistance of Rs. 2,000 each to the nurses for their journey expenses. The Chief Minister, on August 1, had written to the External Affairs Minister Sushma Swaraj seeking the Centre's help in arranging flight for facilitating the return of the nurses.

Due to the terrifying experiences they had in the violence hit country, the nurses refuse to go back despite having debts and financial crisis. Tears rolled down their cheeks as they met their family members who came to receive them. One of the nurses who returned said "The journey to the Tunisian border by bus was a nightmarish one. It took about five hours to reach there. All of us were praying as we could hear gun shots. At one point, we saw two people being killed." "Since the Tripoli airport has been destroyed, we never believed that we could return to our home. Special thanks to God, the Kerala chief minister and the central government. We will never forget the terrifying bus journey to the Tunisian border," said another. Since the nurses returned home under emergency situation, some of them could not get their experience certificates. Job opportunities will be provided for the nurses. Last month, forty six nurses, who were held captive by the ISIS militants in Iraq, arrived home by a special Air India Flight.