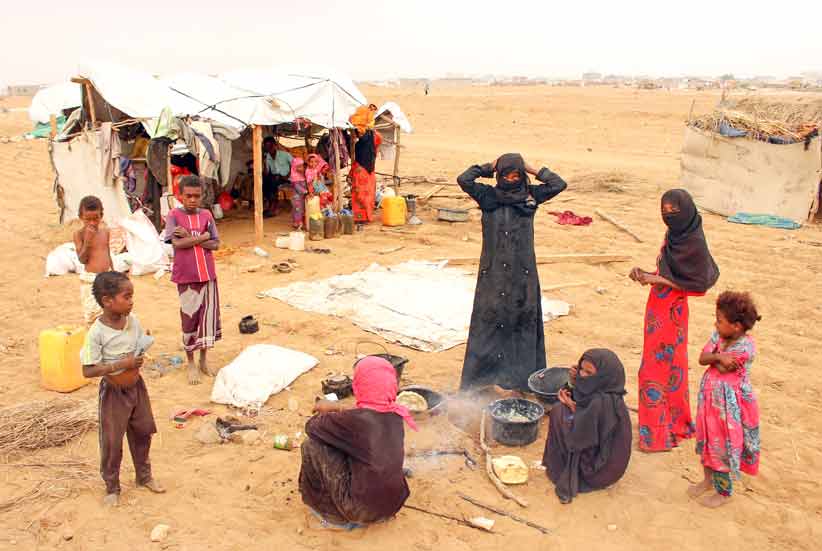 Sanaa: At least 17 people were killed and dozens of others wounded in clashes between the security forces and gunmen belonging to a group of army defectors at the Yemeni interior ministry on Tuesday morning, officials and medics said.

"A total of 11 soldiers' bodies have been brought to the police hospital and dozens of others were receiving treatment," doctors at the hospital told Xinhua.

"The central security forces have taken control of the ministry building after dozens of defected soldiers fled the scene," it said.

Police officials said the clashes erupted after troops of the defected First Armored Division and gunmen loyal to opposition tribal leader Sadiq al-Ahmar entered the headquarters of the interior ministry late on Monday.

"A large number of troops from the defected army and militants loyal to al-Ahmar attacked the security soldiers guarding the building of the ministry, and then set up several barricades around the scene," a police official at the ministry told Xinhua by phone.

"The government forces in the nearby security camp tried to protect the ministry and drove those militants away... but the defected troops opened fire on the security soldiers. Severe clashes have continued for more than 10 hours," he said on condition of anonymity.

"The defected soldiers claimed that they received orders from the defected general Ali Mohsen al-Ahmar to enter the ministry in order to protect it," he added.

All roads leading to the clash area were blocked by the rescue police forces and armed tribesmen led by Sadiq al-Ahmar. According to witnesses, militants loyal to al-Ahmar have been deployed around the interior ministry.

Several ambulances carrying injured soldiers were seen coming out from the clash zone and a nearby security camp, which is responsible for guarding the ministry.

Meanwhile, about eight armored vehicles from the central security forces were seen heading to the interior ministry, while the sound of heavy machine-guns was still rocking the area.

According to witnesses, both sides of the clashes sent reinforcement to the area after conflict intensified and spread Tuesday afternoon to neighborhoods close to the U.S. embassy in eastern part of the capital.

In the past three days, sporadic gunfire between security forces and armed tribesmen was seen around the interior ministry. In Yemen, tribes always play an important role in the political process as hundreds of thousands of militants only pledge loyalty to their tribal leaders.

Yemen's interior ministry said on Tuesday that an Italian diplomat were kidnapped by tribesmen two days ago and has been transferred to a remote area in the northeastern province of Marib.

The abductors led by fugitive Ali Nasser Hiraygdan from Marib " are demanding compensation for disputed lands as well as the removal of their names from a blacklist of murderers and bandits," the ministry said in a statement posted on its website.

Tuesday's fighting is the worst clash since Yemeni President Abd-Rabbu Mansour Hadi took office in February. Sanaa has witnessed a month-long street battles between the defected army backed by militants of Sadiq al-Ahmar and forces loyal to former President Ali Abdullah Saleh before he handed over power to Hadi.

Hadi has vowed to reunify the army, restore security and launch a national dialogue to settle disputes among all political factions so as to unite forces to combat the Yemen-based al-Qaida network.

He formed a preparation committee earlier this month in an attempt to break the deadlock and push forward the reconciliation dialogue. However, both the ruling coalition and opposition accused that the committee lacks proper representativeness and voiced dissatisfaction about its work, which further deteriorated the fragile security situation.