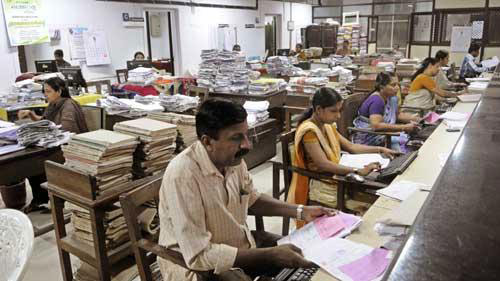 Thiruvananthapuram: The indefinite strike launched by pro-Left and pro-BJP unions to protest state government's decision to introduce Contributory Pension Scheme (CPS) from this year partially affected functioning of government offices and schools in the state Tuesday.

The government, however, claimed that 62.1 per cent of employees attended offices despite the difficulties caused by strike by private bus workers and a section of Kerala State Road Transport Corporation (KSRTC) employees.

In a relief to the people, the two-day old private bus workers strike was settled Tuesday at tripartite talks convened by the government, which came out with a formula of a hike of Rs 60 per day in the wages of the workers.

Of the 4,852 schedules across the state, the KSRTC operated 2,131 services, he said. KSRTC employees had called for a one-day strike today to express solidarity with the government staff and teachers.

Stray incidents of minor scuffles between striking employees and those opposed to the agitation were reported from some parts of the state.

Meanwhile, people heaved a sigh of relief when private bus workers announced withdrawal of their strike after holding talks with bus owners in the presence of Transport Minister Aryadan Mohammed and Labour Minister Shibu Baby John in Kochi.

While announcing an interim revision, Shibu Baby John said a committee would be constituted to look into the genuine demands of private bus workers.

Official sources said action would be taken against principals of schools who refused to open the institutions today. At Pattom in the capital city, the Model Girls Higher Secondary School could not be opened as the principal closed the school and went off with the keys.