Have no safety issues in India: Shah Rukh 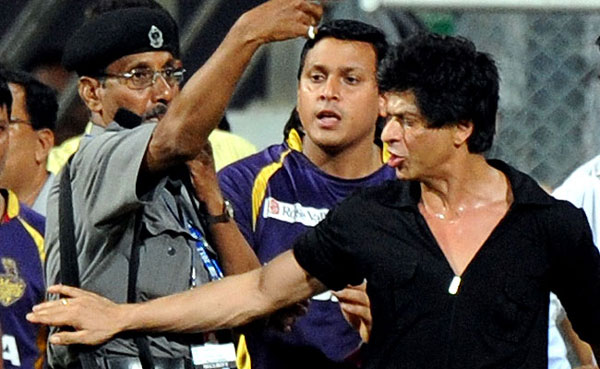 Mumbai: As India and Pakistan spar over the issue of security for Shah Rukh Khan, the Bollywood superstar Tuesday said it was sad that an article written by him took an "unwarranted twist" and he was forced to reiterate his patriotism.

The actor seemed emotional as he read out a lengthy statement and chunks from his article, which he wrote for a weekly English magazine, to address the controversy at an event here, saying, "I do not even understand the basis of this controversy."

The furore started after Pakistan's Interior Minister Rahman Malik said that India should take care of Khan's security, drawing sharp reaction from India with the government as well as the political class saying should be more worried over security of its citizens.

Caught between the political tussle, the 47-year-old actor said it was ironical that people were reacting to his article without even reading it.

The controversy stemmed from the actor's remarks that he sometimes became inadvertent object of political leaders who choose to make him a symbol of all that they think is wrong and unpatriotic about Muslims in India.

Reacting to Malik's statement, the actor said in a press conference here that "I would like to tell all those who are offering unsolicited advice that we in India are extremely safe and happy.

"My own family and friends, are like a mini India... where all religions, professions and a few wrongs included, all are treated with tolerance and understanding and regard for each other... I stand indebted to my audience in my country and around the world. It is sad that I have to say it to prove it, in my country, which my father fought for, during the Independence struggle.

"We have an amazing democratic, free and secular way of life. In the environment that we live here in my country India, we have no safety issues regarding life and material. As a matter-of-fact, it is irksome for me to clarify this non-existent issue".

Shah Rukh said "being a public figure makes me prone to any kind of questioning, good and bad and at sometimes and on sometimes makes me an object of controversy as people use my name and statements to attach any positive or negative sentiment to it. This is the life I chose and stand by it... I am, because of the love and admiration that comes with being who I am in my profession. I thank everyone for making me the star I am".

He said the whole issue "has taken an unwarranted twist. I do not even understand the basis of this controversy".

According to him, the article he wrote was "actually meant to reiterate that some occasions might being an Indian Muslim filmstar is misused by bigot and narrow-minded people who have misplaced religious ideologies for small gains", and ironically the same has happened through this article once again.

"I think some people not even read and are reacting to comments of people who in turn have also not read it. So I implore you all to first read it", the actor said.

Shah Rukh said he has written the article for a weekly English magazine.