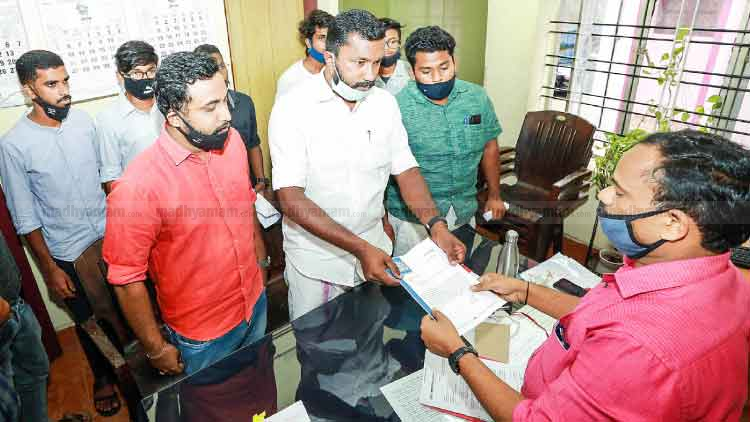 The KSU activists were claiming to press the demand for a roll back of the Plus One fee hike decision.

The incident triggered strong reaction from a cross-section of the society including student leaders, bureaucrats, politicians and social activists. The KSU state leadership however disassociated itself from the protest and expelled KSU district secretary Sippy Noorudeen who led the attack, from the primary membership of the organization. The police arrested eight persons including Noorudeen.

Police said five KSU workers entered the director’s office located in the Hosing Board building near the Secretariat around 2 pm. They urged the director to roll back the decision to hike the Plus One fee. The officer assured them that the matter was with the government and a decision would be taken soon.

Suddenly, Nooudeen who had brought engine oil in a bottle, poured it all over the officer while his friends started slogan-shouting. There was oil all over his shirt, office files and furniture. KSU workers also assaulted some staff members who tried to prevent the five from attacking the officer, police said.

“They did this without any provocation. I never expected such an act in a civilized state like Kerala,” said the IAS officer hailing from Bihar. He lodged a petition with chief minister Oommen Chandy and DGP KS Balasubramanian, seeking stern action against the accused. He also sought adequate security for his office.

KSU state president VS Joy said, “We cannot justify such protests. The KSU leadership was totally in the dark. We have expelled him from KSU,” said Joy.

Apart from Sippy, the others arrested were Sreelal, Vignesh, Shanuraj, Sadiqque, Abinaz, Anzar and Shameem.

Home minister Thiruvanchoor Radhakrishnan said stern action would be taken against those involved in the 'uncultured' act.

A complaint in this regard has been lodged by the Director and based on that, action would be taken against guilty students, police said.

The students also tried to intimidate the employees who attempted to evict the agitating students from the office room, police added.