Six policemen arrested in connection with death of Kanpur businessman 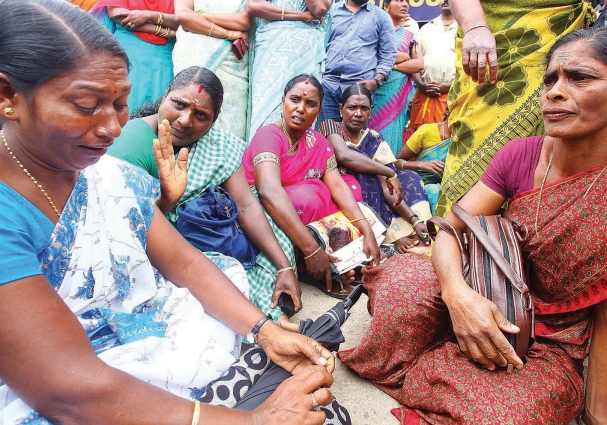 New Delhi: The calming ambience of Rashtrapati Bhavan's lush-green Mughal Gardens is all set to welcome the visitors to its 70 varieties of seasonal flowers, including specially imported flowers from the Netherlands and Japan, from February 6 to March 10.

Set against the majestic backdrop of the presidential residence, designed by British architect Edward Lutyens, the 15-acre gardens will open as part of the annual 'Udayanotsav' -- a long-standing tradition of the Bhavan.

With this year's colour scheme of the ornamental flowers being white, yellow, red and orange, the President's Garden is blooming with 2019's special attractions: 10,000 tulips in vivid colours, seeds of which were obtained from the Netherlands, and Matthiola incana, a Japan-imported flower which blossoms into a beautiful white.

During a walk-through of the open space, P.N. Joshi, the garden's Superintendent since 30 years when R. Venkatraman was President, pointed to Rudraksha trees that were introduced by President Ram Nath Kovind.

"The Bhawan is constructed out of red stone, so we choose majority of whites and yellows to make the flower show stand out," Joshi, who has been responsible for designing and preparing the entire garden told IANS, adding that the garden has slowly moved on from planting just local flowers to more exotic varieties.

Usually hailed as a perfect day-out destination for visitors, especially children and nature lovers, the Mughal Gardens have around 137 varieties of roses on display, along with small patches of the Pasadena, Pansy, China Man, Marigold, Antigun, Pink Parfait, Dahlia, Zambra, and Laptosinia flower varieties, and creepers.

Floral carpets designed by over 40 gardeners will be on view.

Apart from the flower gardens, a spiritual garden showcasing plants significant to all religions, a herbal garden with patches of Brahmi, Giloy and Ashwagandha plants among others, a Bonsai garden and a musical garden will be open to public.

A beautified cactus corner with interesting varieties of cactus and succulents has been landscaped, along with showcasing of air purifying plants, and organic fresh vegetables and fruits grown in-house.

A ready relief from Delhi's choking pollution, the botanical treat will also be accessible to wheelchair-users. A tactile garden for visually impaired will be open on March 11 from 11 a.m. to 6 p.m.

According to the Rashtrapati Bhavan's representatives, over half a million (5.54 lakh) visitors enjoyed the garden visits over a month-long opening in February and March last year.

This year, a free online booking facility has been introduced at www.presidentofindia.gov.in. It is available seven days in advance and has been divided into seven hourly slots - starting from 9 a.m. to 3 p.m. - in weekdays (Monday to Friday) and three hourly slots - 9 a.m., 10 a.m. and 11 a.m. - on weekends (Saturdays and Sundays) and on holidays.

A maximum of 10 visitors can be booked in a single booking for weekday's visit while the number is five for weekends and holidays. Mobile number is mandatory for online booking.

According to the representatives, priority will be given to the online applicants, who will also have a separate queue.

Visitors can also visit the adjoining Rashtrapati Museum and witness the Change of Guards ceremony.

In a special appeal made by the representatives, people are encouraged to visit the museum that tells the story of legacy of Indian Presidents and history of freedom struggle.

Including a special design map of the Mughal Gardens, done by British architect Edward Lutyens, the museum has to offer historical archives and artefacts, especially a vast collection from 1905 to 1947.

The museum complex, which comprises three heritage buildings (Presidential Stables, Presidential Garage and Clock Tower), offers information on construction of the Raisina Hills, role of the President in the Indian democracy, the Preamble and the Constitution, and each President's legacy.

"It is 'Rashtra ka Bhavan', and people should know about the main Presidential house, the Mughal Gardens as well as the Rashtrapati Museum. While visiting the Gardens, why not just walk a few more steps and explore the museum too," the museum's information officer Kumar Samresh told IANS.

The museum is open for public on all days except Mondays and government holidays from 9 a.m. to 4 p.m. Visitors can book their tour online at www.rb.nic.in. On the spot booking facility is also available.