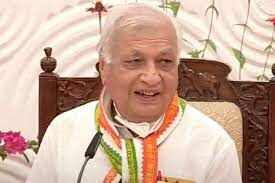 Kozhikode: Jamaat-e-Islami Kerala General Secretary VT Abdulla Koya said that the Governor should not make statements when the seeds of hatred sown by the Sangh Parivar are growing in his mind.

He was responding to the Governor's statement that Jamaat-e-Islami workers had whacked him on his head with a stick at Jamia Millia Islamia University in New Delhi.

Koya said in a statement that as Jamaat-e-Islami does not have a youth wing in Delhi, the Governor should reveal the time and circumstances of the attack. Even though he was assaulted, he did not file a complaint, and it might be because the Governor was not even trusting the Delhi Police.

Governor Arif Muhammad Khan, who is in the constitutional position, was making an allegation that even the staunchest enemies of Jamaat-e-Islami have not made to date, Koya said. By this, he is making a mockery of himself. He had come forward with such accusations because he still has a grudge against Jamaat, which had stood against him in terms of ideologies when he came to Kerala with the Sangh Pariwar agenda during the Shariat controversy. Koya added that such false propaganda would not work in Kerala.