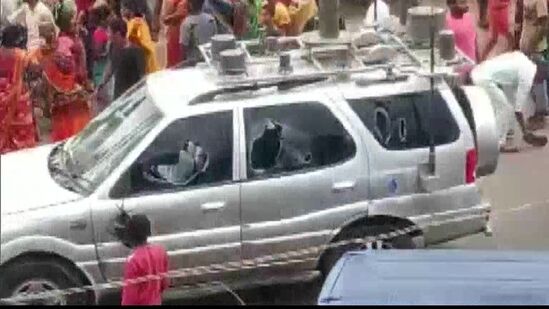 Patna: Bihar chief minister Nitish Kumar's convoy was attacked on its way to Gaya. However, he was not in any of the cars.

The chief minister is expected to visit Gaya tomorrow. The convoy was being sent in anticipation of his visit. The cars were stopped and attacked by a mob, reported NDTV. Videos from the area showed a mob blocking the road by burning car tyres and bamboo poles. They threw stones at the cars and broke the windows with rods.

Sources told NDTV that locals were angry over a young resident who went missing days ago and was found dead. The family was holding protests with his body. They are residents of a locality under the Gaurichak police station area. Senior police officers reached the spot soon after the agitation began.

After the videos of the attack went viral on social media, BJP supporters criticised the new Mahagathbandhan government saying it is proof of lawlessness. Others alleged that the incident was a BJP conspiracy.

Nitish Kumar ended JD(U)'s alliance with BJP last week and joined hands with Tejashwi Yadav's Rashtriya Janata Dal, the Congress, and several other parties. Some say that the eight-term CM felt that BJP is attempting a Maharashtra model power struggle in Bihar. He also claimed that the BJP does not offer the same support in return.