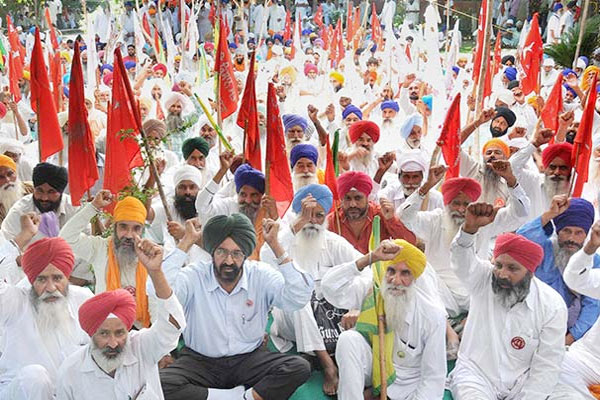 Chandigarh: Farmers' groups on Wednesday held protests at several places in Punjab against "anti-farmer" bills introduced by the Union government in Parliament.

They said the government should have consulted the farming community on the bills, which were promulgated as ordinances earlier, as they could adversely impact them.

The Union government had on Monday introduced 'The Farmers' Produce Trade And Commerce (Promotion And Facilitation) Bill', 'The Farmers (Empowerment and Protection) Agreement on Price Assurance and Farm Services Bill', and 'The Essential Commodities (Amendment) Bill' to replace the ordinances.

It has argued that these measures will free farmers from the existing government-controlled markets and prices, and that they can enter into agreements with private parties for a better price of their produce.

Farmers have expressed apprehension that once these bills are passed, they would pave the way for dismantling of the minimum support price (MSP) system and leave the farming community at the "mercy" of big corporates.

In Mohali, members of 11 farmers' groups held a protest. They termed the bills "anti-farmer".

They said the Centre should have sought the farming community's opinion before promulgating the ordinances.

The protesters were stopped midway by police during their march to the residence of the Punjab governor to handover a memorandum to him. Later, 11 leaders of different farmers' groups were allowed to proceed, officials said.

Bhartiya Kisan Union (Lakhowal) general secretary Harinder Singh Lakhowal, however, claimed they held a protest outside the governor's house over the non-acceptance of their memorandum.

Farmers also held protests in Badal village in Muktsar and Patiala under the banner of the BKU (Ekta Ugrahan).

The members of the group had blocked traffic at the Amritsar-New Delhi national highway on the Beas bridge in Amritsar, Harike headworks in Tarn Taran and Tanda-Hargobindpur bridge in Gurdaspur.

Farmer leaders said they have lifted their 'dharna' in view of the hardships faced by the general public.

The Lok Sabha on Tuesday passed the Essential Commodities (Amendment) Bill, 2020 which seeks to deregulate food items, including cereals, pulses and onion, a move aimed at transforming the farm sector and raising farmers' income.

The Centre has said the existing government support measures for farmers will continue.