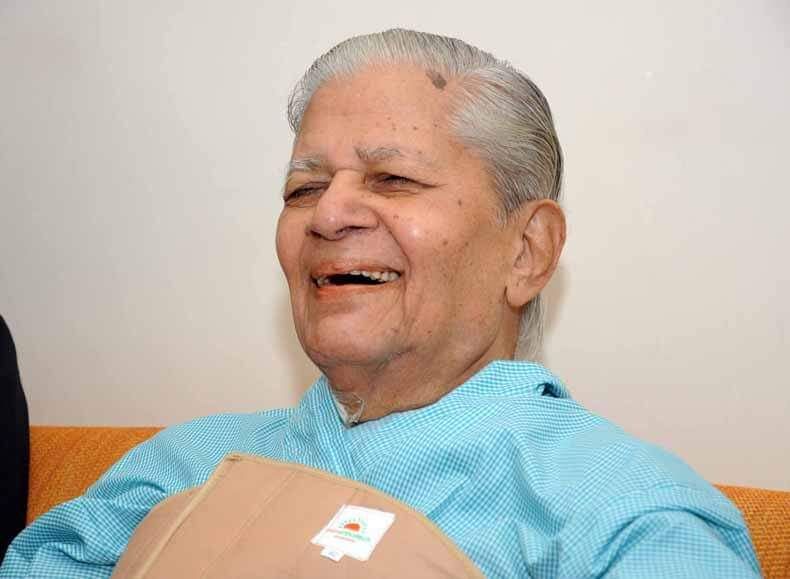 Gandhinagar: Former Gujarat Chief Minister Madhavsinh Solanki passed away at his residence in Gandhinagar on Saturday. He was 93.

The state government has declared Saturday as a day of mourning following Solanki's death.

Incumbent Chief Minister Vijay Rupani offered his condolences and declared that Solanki's last rites will be carried out with due political respect and honour.

Taking to Twitter, Prime Minister Narendra Modi said: "Shri Madhavsinh Solanki Ji was a formidable leader, playing a key role in Gujarat politics for decades. He will be remembered for his rich service to society. Saddened by his demise. Spoke to his son, Bharat Solanki Ji and expressed condolences. Om Shanti."

Gujarat Education Minister Bhupendra Chudasama also offered his condolences and paid respect to the deceased at his residence on Saturday.

"Since the past 20 years, it is my habit to visit Solanki on his birthday at his residence and spend some time with the veteran congressmen. The last time I visited him was on November 15 last year and I congratulated him on his health, as he was descending from upstairs at his residence," Chudasama told reporters.

The nonagenarian Congressman was born on July 30, 1927 in Pilundra village, Borsad Tehsil in Anand district.

He served as the state's Chief Minister for three terms, starting from December 1976 to 1990.

He came out with an initiative called the Mid-day Meal, which has been replicated across the entire nation successfully and still in practice today.

He had also started the girl child nurturing scheme (Kanya Kelavani) in Gujarat, as well as the Gujarat Industrial Development Corporation (GIDC).

Solanki had also been in the limeLight for the apparent Kshatriya Harijan Aadivasi Muslim (KHAM) theory in politics which attracted all constituent communities.

He holds an unbeaten record of winning 149 Assembly seats out of the 183 under his leadership in the Gujarat state assembly.

Solanki had started his career as a journalist, then as an advocate and then entered politics.

An avid reader, he had built a library in his house where he used to spend hours in his later years.