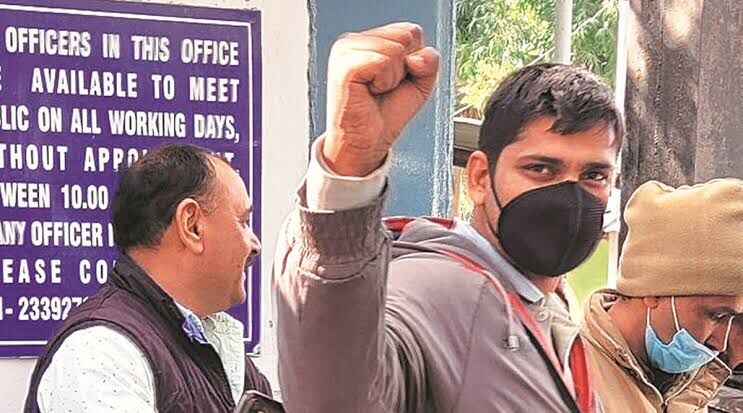 New Delhi: A Delhi court has granted bail to Freelance Journalist and contributor for the Caravan magazine, Mandeep Punia, who was detained on Saturday by the Delhi Police from the Singhu border.

According to media reports, Punia was detained by the police for allegedly misbehaving with an official on duty at the protest site while he was covering the farmers' protest and subsequent clashes which took place at Singhu border.

Punia was arrested along with Dharmendar Singh, of Online News India, who was allowed to go free reportedly after producing an ID proof.

The Chief Metropolitan Magistrate, North District, Rohini Courts on Tuesday noted that there is no possibility that accused/applicant is able to influence any of the police personnel and no recovery is to be made from him while granting him bail on furnishing bail bond in a sum of Rs. 25,000 along with one sound surety in the like amount, LiveLaw reported.

Punia in his bail had submitted that he was merely carrying out his journalistic duties and another journalist detained along with him was released around midnight.

He also averred that he was not carrying a press card, as he was a freelance journalist, but this could be no ground to arrest him.

It is pertinent to mention here that the alleged scuffle incident of present case is of around 6.30 PM. However, the present FIR was registered at around 1.21 AM on the next day. Moreover, the complainant, victims and witnesses are police personnel only. Hence, there is no possibility that accused/applicant can able to influence any of the police officials. Admittedly, the accused is a freelance journalist. More so, no recovery is to be affected from the accused person and keeping the accused further in Judicial Custody would not serve any cogent purpose. It is well settled legal principle of law that "bail is a rule and jail is an exception", Magistrate Satvir Singh Lamba wrote in the operative part of the bail order.