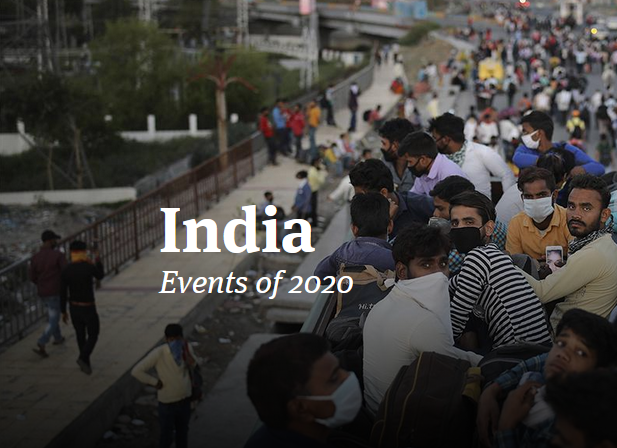 Indian migrant workers sit atop a bus as others walk along an expressway to return to their home villages during a nationwide Covid-19 lockdown, New Delhi, India, March 28, 2020 (A Screen grab from Human Rights Watch website)

The report reveals that 2020 witnessed increase in harassment, minority prosecution and activists, journalists, academicians arrest. It clearly states all those who are critical to the government policy faced violation of human rights.

According to the report "The government continued to impose harsh and discriminatory restrictions on Muslim-majority areas in Jammu and Kashmir since revoking the state's constitutional status in August 2019 and splitting it into two federally governed territories.Report crucially says thatthe authorities failed to take action against BJP leaders who vilified Muslims and BJP supporters who engaged in violence.

The report talks about the 'draconian Public Safety Act' which permits detention without trial for up to two years. "In June, the government announced a new media policy in Jammu and Kashmir that empowers the authorities to decide what is "fake news, plagiarism and unethical or anti-national activities" and to take punitive action against media outlets, journalists, and editors. The policy contains vague and overbroad provisions that are open to abuse and could unnecessarily restrict and penalize legally protected speech". Since August 2019 adversely affected livelihoods, particularly in the tourism-dependent Kashmir Valley.authorities permitted only slow-speed 2G mobile internet services, leading doctors to complain that the lack of internet was hurting the Covid-19 response.

Under Armed Forces Special Powers Act, In July, security forces killed three people in Shopian district, claiming they were militants. However, in August, their families, who identified them from photographs of the killings circulated on social media, said they were laborers. The security forces also continued to use shotguns firing metal pellets to disperse crowds.

Police reportedly beaten up people who violated the lockdown, including those trying to get essential supplies. New cases of torture in police custody and extrajudicial killings highlighted continued lack of accountability for police abuses and failure to enforce police reforms. The report highlights the custodial death of P.Jayaraj his son Fenix and alleged extra judicial killing of Vikas Dubey in UP.

The report also talks about the communal violence that took place in Delhi on February. Human Rights Watch report calls India government's citizenship Act as 'discriminatory'. It highlights how "BJP leaders called the meeting a "Talibani crime" and "CoronaTerrorism." Some pro-government media had screamed "CoronaJihad" and social media platforms were flooded by calls for social and economic boycotts of Muslims." Attacks against Dalits are also highlighted in the report.

According to HRW report "Due to loss of livelihoods and lack of food, shelter, health care, and other basic needs the Covid-19 lockdown disproportionately hurt marginalized communities".

The report also called out the Hathras rape and murder case in particular and highlights how women from marginalized communities face even greater institutional barriers. Sexual harassment at work addressed as an entrenched problem.

Other serious concerns raised on the breakdown on freedom of speech and expression, Right to privacy, Child and Disability rights. LGBTQ issues of sexual orientation and gender identity."The law is unclear on a transgender person's right to self-identify, which India's Supreme Court recognized in a landmark judgment in 2014. Its provisions are also contrary to international standards for legal gender recognition". Report reads