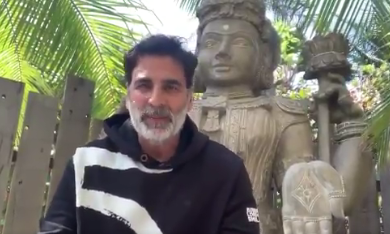 In the video, the 53 year old actor narrated a tale from the Hindu epic Ramayana; he started by saying that the previous night he told his daughter Nitara story of a squirrel which was wishing to make contributions towards during the construction of the Ram Setu to Lanka. "Some of us should be the Vaanars (monkeys), some of us should be the Gilharis (Squirrels)."

Posting the video on Twitter Akshay wrote, "It is a matter of great pleasure that the construction of the grand temple of Shri Rama has begun in Ayodhya ... Now it is our turn to contribute. I have started, hope you will join together."

He ended the video by saying "Jai Shree Ram".