Makers of 'Wild Karnataka' restricted from dealing with the film 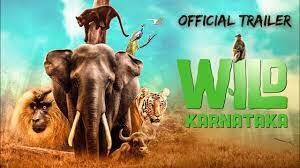 Bengaluru: The makers of the documentary 'Wild Karnataka' have been temporarily restrained from dealing with the film in any manner by the Karnataka High Court, reports Live Law. The court issued the interim order while hearing a petition filed against alleged commercialization of the film and deprivation of the Karnataka Forest Department (KFD) of its rightful share of revenue and copyright mandates.

The court has issued notices to the respondents returnable on August 3. The makers could not use, publish, reproduce, broadcast, market or exhibit the film as per the order.

The petition had alleged that the "public exchequer has been cheated and deprived of crores of rupees worth revenue." The film was supposed to be made on behalf of KFD, it said. While the film was supposed to be non-commercial and the accrued revenue to be donated to Tiger Conservation Fund, the makers approached private sponsors for funding the project. Also, the copyright of the film was agreed to be owned by KFD, and raw footage and a coffee-table book were to be co-owned by KFD and the makers. But only part of the total footage was handed over to KFD, and to date, KFD hasn't raised any demands to procure the remaining, the petition said.

The petition further alleged that no tender or competitive bids were called before sanctioning the film production within protected areas. Also, the Memorandum of Undertaking (MoU) signed by the makers and the government has the mala fide intention to favour the former with duplicitous clauses, which in the end caused a massive loss for the Public Exchequer. The filmmakers approached private distribution companies too, later, for national and international distribution, without the consent or knowledge of KFD. These distributors planned to block the film's streaming outside the Indian territory and distributed it to 100 countries, airlines, broadcasters, networks and dubbed into various languages, exploiting the film and rights granted to it, the petition alleged.

After 15 months after the expiry of MoU, KFD received the final master copy of the film, with a caveat that the film copy could be used only for its internal and offline uses like awareness programmes, despite being the copyright owner. The petition alleged that KFD was ultimately restricted from using the film.